A Foot In Both Camps: Calum Woods

We head over to India for our latest interviewee in this feature, to catch up with a former defender of both the Lilywhites and the Terriers, Calum Woods.

We head over to India for our latest interviewee in this feature, to catch up with a former defender of both the Lilywhites and the Terriers.

Former PNE full back Calum Woods has been with Robbie Folwer’s SC East Bengal in the Indian Super League for the last couple of months.

And whilst most interest in Indian sport at the moment is probably on the Test series between the Indian and English cricket teams, Calum explains that interest in football is growing on the sub-continent.

“The cricket is massive over here, but the footy is actually getting close to the cricket in terms of its popularity, it is up and coming,” he told iFollow PNE.

“I got given the opportunity to come out here a couple of months ago through a friend, who is an agent; he asked me if I would be interested in going over.

“I didn’t know what to expect, but since I have been here, it has been brilliant, I have really enjoyed my time over here. I have been training every day and I have even got involved on the coaching side of things, which has been perfect for the stage of the career I am at.

“I have loved every minute of. The last few years have been difficult with the injuries, since my last season at Preston; I’m 34 now and I am at that stage of my career where I have been thinking that I need to look to the future and see what’s next and I passed my B Licence just before I came over here and coaching is something I want to pursue in the future.

“I have been given that opportunity to do a bit of coaching with them and the coaches have been great out here. Robbie Fowler is the manager and then you have Tony Grant, who is the assistant and Terry McPhillips is a coach as well and they have been brilliant me and so it has been great for me.”

With the five and a half hour time difference, it will be 8.30pm on Saturday evening when the game at Deepdale kicks off between two of ‘Woodsy’s’ former employers and it will definitely have his attention.

“It is two sides that I always look out for,” he continued. “I have fond memories of both clubs – getting promotion with both clubs, which I can look back on now and be proud to have played for both.

“It should be a good game. I am still looking out for both teams now. I know Preston drew in their last game and hopefully it is a good game on Saturday.

“It is unbelievable that it happened twice for me to get promoted at Wembley with these two clubs; I have amazing memories from both clubs.”

Reflecting on his time at Deepdale, he admits that the injuries that curtailed his game time were frustrating, but it was still a time of his career that he looks back on extremely fondly.

“I has the bad injury with my cruciate and when I came back from that I found it difficult to stay fit. I never had that run in the team; I would play a couple of games and I would break down.

“It was frustrating, I found it difficult because I loved my time there. The people at the club were brilliant with me and Ioved every of my time there.

“The lads who are there and who were there when I was there, it is just one of those places where everyone gets on – that’s the way you want to be at a club.” 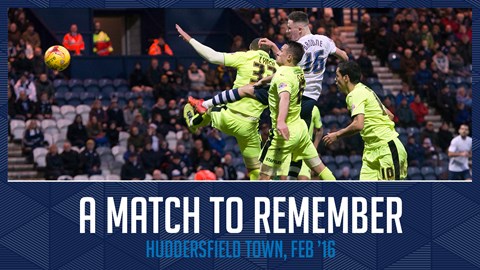 A Match To Remember: Huddersfield Town

And even though he has been gone a couple of years, he is still having an impact in PR1, as he explains about his influence on one of our January signings.

“I had a little chat with Anthony [Gordon] before he signed. I bigged the club up and the bigged the people up, because I know how good they are and I told him it would definitely be the right club for him.

“He is a real talent; you will have seen a bit of him now, but I am sure there is a lot more to come as well.

“He is a talented player. You could see glimpses of how good he was at Everton and being at Preston can only be good for him; getting games, playing week in, week out until the end of the season and hopefully he can create and score goals for Preston and push them on,” he added.