Alex Neil: “We Are More Than Capable”

Preston North End manager Alex Neil says his players must ‘show their best selves’ when they face Queens Park Rangers in front of the Sky Sports cameras on Wednesday night.

Preston North End manager Alex Neil says his players must ‘show their best selves’ when they face Queens Park Rangers in front of the Sky Sports cameras on Wednesday night.

Speaking to iFollow PNE ahead of the Lilywhites’ clash with Mark Warburton’s side, the gaffer said his team’s pride will have been hurt by their weekend defeat at Cardiff, but he expects a reaction.

He said: “We have to create our own atmosphere. We have a lot of important games coming up between now and the end of the season – this is certainly one of them.

“We need to go and try and show our best selves. We had a good victory over QPR earlier in the season, albeit the squads have changed and we are more than capable, as we showed at Blackburn.

“They are in good form, we understand that, but we know that we are more than capable.

“Every game you are not going to be at your very best and sometimes your errors are going to be punished and sometimes when you get the low of the type of defeat that we had at the weekend, then naturally pride tends to get damaged and you see the best of people after that and I am hopeful that our lads will react and play as well as they can.”

The R’s come into the game in fine form, with six wins in their last seven games and their January business has played a part in that, as Alex explained: “What they have added is knowhow. Charlie Austin has been a key factor for them.

“He has come in, he gets goals, he leads the line; his personality and character also helps and they have done really well.

“It will be a tough game; they have been in really good form at the moment and we need to just make sure that we go and play as well as we can.” 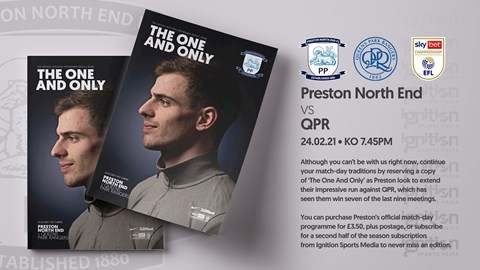 The game earlier this season at the Kiyan Prince Foundation Stadium saw two PNE penalties give them the three points, with Emil Riis impressing on his first start for the club.

“Emil was terrific that day,” continued the North End boss. “I thought he caused them real problems. He popped the ball down for Scott to win the first penalty and then the second one he breezed past the two centre halves and then got brought down.

“What we ned to try and do is focus on playing as well as we can. Try and take the game to QPR and let’s see how we go from there.”

The media have kept talking about the turnover of players in the January window, but Alex feels they are beginning to settle in the club.

“It is important that the lads who have been here for some time step up and help the new lads integrate.

“We have brought a lot of young lads in and you want those who have been here, who know what it is all about, to help and assist and play as well they can on the pitch and equally help the lads off the pitch to settle as quickly as possible.

“A lot of the new lads are starting to settle now, which is good and all we need is a couple of results on the pitch and that will certainly help in terms of those lads feeling more at ease and comfortable,” he added.

The game is live on Sky Sports on Wednesday night, but is still available on iFollow via an audio match pass and in certain overseas territories as a live video pass, with Jonathan Breeze joined by former PNE winger Ross Wallace for full match coverage from just after 7.15pm. Click here to check what is available in your area.