Greg Cunningham was delighted to help Preston North End return to winning ways as his superb opening goal proved crucial in the 2-1 victory over Blackburn Rovers.

Greg Cunningham was delighted to help Preston North End return to winning ways as his superb opening goal proved crucial in the 2-1 victory over Blackburn Rovers. 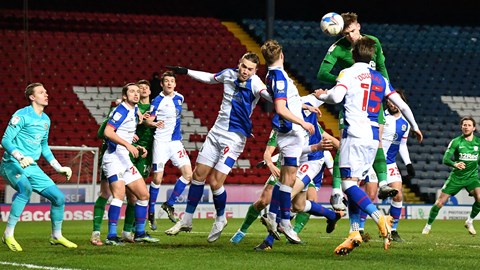 Making his first start for the Lilywhites since returning for his second spell with the club in January, the Irishman opened the scoring with a superb strike on the bounce inside 20 minutes, after controlling Alan Browne’s impressive Crossfield ball.

After Liam Lindsay and Adam Armstrong struck at either end within minutes of the half-time whistle, Greg felt that everyone worked admirably to get the right result at full-time.

Speaking to iFollow PNE, he said: “First and foremost, I think we’re delighted to get back to winning ways. We know the last couple of performances haven’t been up to scratch.

“We knew it was going to be tough this evening. With no fans in here, we knew that they were watching from home and we needed to make sure that we got the bragging rights today and we did that. I felt we deserved the game, I thought we controlled it.

“We stood tall and second half, defensively I thought we were brilliant. Every man really put a shift in and we’re delighted to get the result for the club.”

Greg left North End in the summer of 2018 for Cardiff City and after a frustrating couple of years away, the defender was delighted to mark his first back in North End colours with a goal.

“It goes without saying how frustrating the last couple of years have been for me. I just want to get back to doing what I love and that’s playing games.

“I’m really happy here, I’m delighted to be back, and like I said when I joined, I’ve got unfinished business and I just want to contribute as much as I can to this team.

“I had a stinking touch just before that [the goal]! It’s a great ball by Browney, great vision, and I think I was just concentrating as it was flowing, ‘Just take a good touch’. It sat up nicely and I just swung a leg at it and happy it went in.”

The 30-year-old highlighted the action-packed moments leading up to the break, when Rovers pulled a goal back from the spot, and then went close to equalising through Adam Armstrong, but for a fine Daniel Iversen save.

“We know how dangerous Blackburn were, 2-0 up with five minutes to go [until half-time], and then we concede and Dan pulls off a great save from Armstrong at the near post. We could be going in 2-2 after controlling the game.

“We just had to kind sit down and calm down a little [at half-time]. Emotions are still flying and we’re disappointed in the last five minutes of that first half.

“At the end of the half, we’re still a goal up. Blackburn would have taken a lot of confidence from the finish to the first half and we knew they’d come out fighting, but we just had to stand strong and the boys showed great character.”

As North End prepare to welcome Watford to Deepdale next midweek, Greg spoke of the mentality within the group as they looked to build some momentum.

“You can see the group we have here and I think it’s just about building on that now, getting more consistency and making sure that we keep turning out them performances and winning games.

“It was a tough slog from everyone and everyone put the work in. We’ll rest up tomorrow and we’ll get prepared for the next game on Tuesday.”