Goalscorer Kyi Nicholson was pleased to get on the scoresheet in the youth team's 3-0 victory against Accrington Stanley, but said that getting the right result was the most important outcome from the game.

Nicholson played a crucial part in North End's win against Stanley, hitting the opening goal for the Lilywhites before fellow second year scholars Ben Dooley and Joe Rodwell-Grant also found the target to put the hosts in a commanding position at half-time.

The versatile coolly slotted home on 28 minutes through the 'keeper’s legs for his goal. 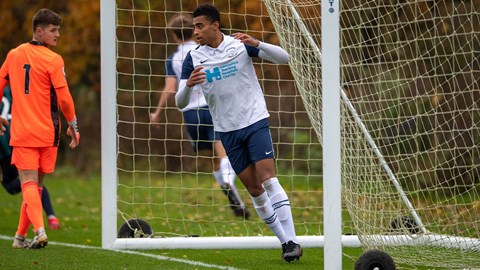 Speaking after the game, Kyi said: “I have got to be modest; my goal had a bit of luck about it.

“It's bounced off the defender's leg and fell to me but I still had the composure to put it through the keepers legs.

“It was nice to score, but it was more important to get back to winning ways because the last couple of games haven’t been good enough, we know are better than what the results say, so it was important we put that right.

“Another bonus for us today was that we kept a clean sheet, something we haven’t done for a while, I also thought we looked threatening going forward, creating loads of chances, and of course getting the three goals today to ensure all three points”.

North End found themselves out of sight within the first 40 minutes of the first half, and Nicholson revealed that starting so quickly is something that the side have been working on and trying to do more often.

“We know we have been starting games slow and not really playing well until later in the game or just when it's too late, so one of our main objectives today was to start off quick and put them on the back foot and we managed to do that.”

PNE welcome Morecambe next in the North West Youth Alliance league and Kyi is hopeful the young Lilywhites can now build on the momentum gained from an important three points against Stanley.

“It was important to get back to winning ways. We have to start the game next week the same way we started today, that’s on the front foot, attacking teams and defending well as a team. We have the ability to do it.”