After a tightly contested opening 45 minutes, the Lilywhites came out of the blocks quickly after the break, and created a wealth of chances – including two efforts that struck the woodwork from Tom Barkhuizen and Ben Davies.

Chris Hughton’s side, however, were victorious thanks to a spot kick converted on 70 minutes, which the manager described as ‘dubious’ even before Lewis Grabban struck the ball twice from the penalty spot. 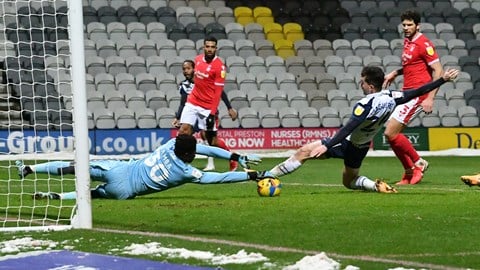 “I don’t really talk about officials too often and I actually like the referee, I think he’s a very good referee at this level, he’s done great in the games that we’ve had him before,” Alex told iFollow PNE.

“Today, I thought the penalty is dubious, so I can’t really have too many complaints because I think it’s a 50/50 one where half people give it, half don’t and I think sometimes that goes your way, sometimes it doesn’t.

“The next bit’s my biggest frustration because I think that’s what cost us a point or even three because I think at that stage of the game, there was only one team going on to win. The fact that we can’t see a double hit, when it was really quite clear – I’ve seen it back. You can always tell by players’ reactions.

“Declan immediately runs up and starts going up to the referee and starts remonstrating. You can tell with the referee that he’d made the error and I think that’s the biggest disappointment because we didn’t deserve to lose that game today.

“They didn’t have a shot on target, so it’s not one of them ones where you think, ‘We’ve defended better, we did this better,’ the simple fact is a bad decision has cost us some points.

“Players aren’t running all over the pitch, you don’t have to watch and see who’s doing what. There’s one action in the game at that point, which is one kick, you’ve got to make a decision whether the goalie comes off his line, somebody runs beyond the ball and encroaches, or even easier, he hits the ball twice. The fact that we didn’t get that right tainted the game for me really because it got decided on something that was wrong.”

Having opened up the visitors’ backline on a number of occasions, particularly in the second half, North End had begun to gain the momentum which Alex felt would have seen his side go on to the win the game, until that penalty decision came. 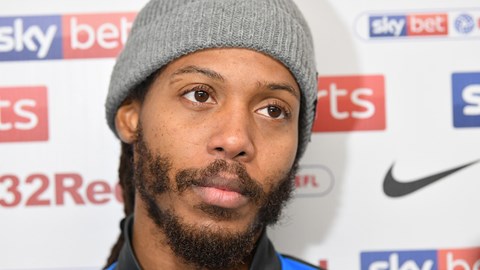 “It’s a strange feeling, because probably over the last three games that we’ve played, we’ve played better in the second half today than we did in other ones that we one.

“We certainly created more opportunities today, hit the woodwork twice, Gally’s got a great chance and the ‘keeper makes a good save, Tommy B should score with a header and he’s got another with his left foot where he puts it over the bar. Declan doesn’t have a save to make.

“We haven’t lost the match through poor defending or poor finishing, we should have taken opportunities that came our way. But I do feel if that action was rightly officiated and a free-kick was given to us, we would have went on and won the game.

“I thought the ascendancy was with us, I thought the second half the lads did great, so to lose in that manner is extremely frustrating.

“I thought first half we sort of felt ourselves into the match, neither team really did enough. I asked for more at half-time, I thought particularly at the flanks we needed to be more aggressive in the game, I thought we got all of that and credit to the lads, I thought second half they did great. But we didn’t take chances when they came our way and we got done by a really bad decision.”

Alex said his team won’t be feeling sorry for themselves, despite feeling aggrieved by that decision, and is now hoping to welcome back some of his currently sidelined players – and rest his squad over the next two free midweeks – before their next league game away at Bristol City in a fortnight’s time.

“It lets us do a bit of work on the training ground and it gives the lads a lot of rest, so that’s pleasing,” he added.

“What we don’t want to do, and I said to the lads, we don’t want to just labour on this now and become a victim over it, it is what it is. Hopefully they will look at it and understand they made a poor decision. It doesn’t bring any points back for us but what we’ve got to do is let it go, have a few days’ rest, and get ourselves ready for the next one.”

Watch more from the manager by clicking the video above.