The Irish international’s new contract takes him to the summer of 2024 and to ten years with the Lilywhites.

The No.8 joined the club in January 2014 and has gone on to make 273 appearances, scoring 35 goals. He was the Sir Tom Finney player of the year winner in 2018, as well as picking up two goal of the season awards.

During his time with the club, he has also become a regular with his country, scoring once in 11 appearances for the Republic of Ireland and he was appointed club captain in the summer.

Speaking after completing the deal Alan said: “I have been here a long time and it is such a relief to get it over the line and have a few more years of me being at this fantastic club and hopefully we can make the next coming years successful. 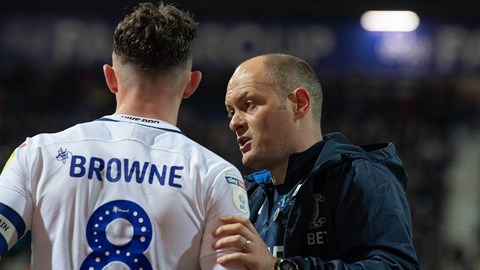 “It is time to take the next step with my career. I had different opinions from different people and I wanted to gather as many opinions as I possibly could I felt that this was the right decision for me and hopefully I can progress with my own career, as well as with the football club.”

Manager Alex Neil was also delighted his skipper had committed his future to the club. He said: “The fact that since Tom Clarke left, we have made Alan the captain, shows how him how high a regard we hold Alan.

“He has been an ever-present since I have been here and his will to win, what the club means to him, how long he has been there, he is the right guy to take that armband forward and I am delighted he has committed himself to doing that for the next few years.”