Preston North End midfielder Daniel Johnson says that he is looking for the team and himself to push on after signing his new contract.

Preston North End midfielder Daniel Johnson says that he is looking for the team and himself to push on after signing his new contract. 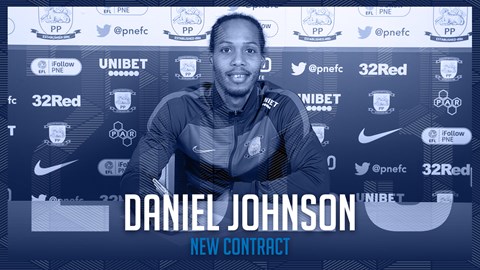 The Lilywhites’ No.11 has completed a new deal until the summer of 2023 and feels that the position the team currently find themselves in is one they can kick on from.

“We want to focus on ourselves and look upwards,” he told iFollow PNE after finalising the paperwork. “We are one of the teams who had a shaky start, but we have found that bit of momentum and hopefully we can push on for the rest of the season.

“Since my time being here, I have always felt that we are better chasing; I don’t know why, it just always feels like that.

“We have found ourselves in good positions and it has never really worked out for us, but now, we’re the team chasing, applying that pressure.

The Jamaican international admitted he was relieved to get the deal done and now was looking to have full focus on his football.

“I am relieved, but I am very happy that it is done,” he continued. “It is put to bed now and for quite a while it has been what I have focused on, so I can get tunnel vision and focus on my football.

“I have been here quite a while and I am happy to still be here. The goal now is to kick on and start producing what I know I can produce and keep helping the team.

“I have become one of the senior players at this football club and it is about showing that and helping pass on information to the younger boys in the squad.”

And he admits that the manager played a big part in his decision, as well as the ambition of Alex Neil and the club: “I have worked with the manager since he has been here and I have really enjoyed working with him; I have told him that every time that we speak.

“The conversations with him have been key for me in my decision to want to stay.

“You can see [the ambition]. The lads who have come in the door, three of them have found themselves in the team quickly and we have picked up some good results, which is good for the team and hopefully I can start playing my part,” he added.