Greg Cunningham: “Delighted To Be Back”

Preston North End’s returning left back Greg Cunningham says he wants to repay the club for bringing him back.

Preston North End’s returning left back Greg Cunningham says he wants to repay the club for bringing him back.

The 29-year-old defender completed a loan move for the rest of the season on Thursday – having been with the Cardiff City squad at Barnsley on Wednesday night – and was clearly thrilled to get the paperwork done.

“I am delighted to be back and I am really looking forward to the second half of the season,” he told iFollow PNE after putting pen to paper.

“I am excited. The move [to Cardiff City] probably didn’t go as plan, but that is football sometimes. When Preston came in, it was a no brainer.

“It happened relatively quickly and I am looking forward to getting back in amongst it with the boys and getting ready for the weekend.”

He feels there is more to do, after his first spell, which saw him play 111 games in three years: “There is unfinished business,” he continued. “It has probably been the best time of my career at this club and I want to get back to those times again, get playing games and repay the club.

“I am still 29 at the minute! I am feeling good and feeling fresh. I had limited game time, other than the loan spell at Blackburn, but I feel I have a lot to give and I just want to thank for the club for bringing me back and I want to repay them for that. 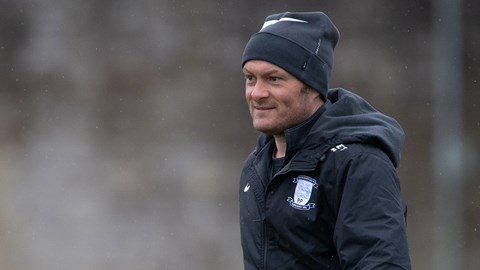 “I am really looking forward to seeing everyone tomorrow. I feel settled already and I am only just in the door. The training ground is very impressive, a lot different to Dodney Drive – which will always have a special place in my heart – but this is very impressive and I am just raring to go and get going.”

And, with the No.37 on his back, the Irishman is ready to go this weekend, if selected in the squad and looking to ‘hit the ground running’: “I am ready to go. I feel really good and I just want to get out on the training pitch, meet the boys and see the gaffer and get things rolling. The gaffer and I had a brief conversation and I am looking forward to speaking with him again.

“The games are going to come fit and fast. We are expecting a big second half of the season and I want to get cracking, really enjoy playing my football again, getting some wins under our belt and pushing up the table.

“It is so competitive. Every year the league gets tougher and tougher. Games are very unpredictable, but it is important that we hit the ground running at the weekend and get on a good run and see where it can take us,” he added.