Forward Jacob Holland-Wilkinson acknowledged that the youth team are going to have to take their defeat to Blackpool as a ‘learning curve’ and ‘put it right’ in the coming weeks.

The young Lilywhites were beaten 4-1 by their local rivals at UCLan Sports Arena on Saturday morning.

Holland-Wilkinson opened the scoring, but the visitors turned the game around to take the three points in the North West Youth Alliance league. 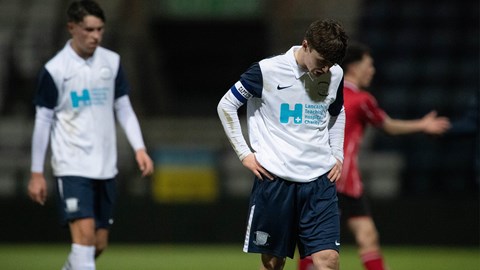 “Obviously everyone was gutted,” said the 18-year-old. “You prepare all week for a big game, something that we’ve all been looking forward to, and it’s just something that we’re going to have to take as a learning curve and now put it right in the next few weeks.

“It’s something that we’re not going to take lightly. We want to change it and we will work on it during the week.”

Despite netting his second goal of the season for the under 18s, Holland-Wilkinson was conscious of the struggles that the side are currently facing in the final third.

“It’s just that little bit of clinical edge that we’re maybe lacking at the minute, of just trying to put the ball in the back of the net when we need to,” he told PNE.com.

“[For the] first 15 minutes we were dominant, and we should’ve been two or three nil up, and that’s something that probably could’ve won us the game if we did put those chances away.”

The defeat was the youth side’s third in a row in all competitions, but when analysing what he and his teammates can learn from the loss, the second-year scholar recognised that these patches are part and parcel of playing football.

“I think the biggest lesson is that you’re going to lose games every now and again and that’s something that you need to be able to mentally deal with and then put right in the next few weeks,” Holland-Wilkinson added.

“It’s going to happen in your career numerous times and it’s something that if you want a career in the game, you’ve got to take it on the chin and move on and hopefully make it better.”