Harry Huddart said the youth team needed to be more ruthless as they lost 1-0 to Lincoln City in the FA Youth Cup third round at Deepdale.

Harry Huddart said the youth team needed to be more ruthless as they lost 1-0 to Lincoln City in the FA Youth Cup third round at Deepdale. 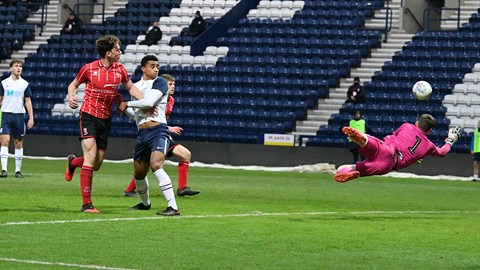 A late goal from opposition forward Freddy Draper gave the Imps the win, setting up a fourth round tie with Watford in the process.

North End were not without their chances and plenty of possession in the 90 minutes in PR1, and while looking solid in defence for much of the contest, the late goal caused frustration for Huddart and his team-mates.

The versatile defender has recently had opportunities to train with the first team, and as one of the senior figures in the line-up as a second year scholar, he admitted those experiences have aided his game.

He was also relatively pleased by his display alongside fellow centre back Joe Blanchard, but of course, that was no consolation for the result.

“I’m pleased, bit I think we switched off for the goal for a little bit, and you have to stay switched on the whole time because you can get punished, and we did, so it’s frustrating. I think we [he and Blanchard] both played well together.

“They’ve [first team players] all been really welcoming and helped get you settled in. You learn a lot of things about talking and encouraging others and it’s been good and it’s made me feel more comfortable and I felt more of a leader in the team today, which was good.

“There’s a lot of things you can bring through that you can learn from the older players.”

While pleased to have had the opportunity to play at Deepdale due to the previous postponements forcing the fixture to be reversed from the original venue of the LNER Stadium, Huddart now believes the youth team must put this result behind them as their league season continues.

“We have to make sure we continue to develop, all of us, especially for the second years because we’re looking to get professional contracts here and anywhere we can really so we just need to progress on and do as much as we can.”

Watch more from Harry by clicking the video above.