Youth team midfielder Lewis Leigh said he and his team-mates were disappointed to lose to Oldham Athletic in a game that was contested in remarkably snowy conditions at UCLan Sports Arena. 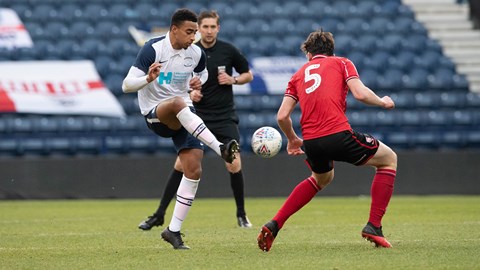 The visitors took a three-goal lead in the North West Youth Alliance clash, and late goals from Mikey O’Neil and Joe Rodwell-Grant were not enough to recover anything from the game for North End.

With 11 places separating the two teams before kick-off and the Latics having won just once in the league this season, the result was a hard one to take for Leigh.

“We’re obviously disappointed because they’re bottom of the league and we needed the points to go back towards the top of the league because we’ve dropped back down to third now, so disappointing,” he said.

“We fought back towards the end but we just couldn’t get it done. We’re just lacking a clinical edge in the final third.

“We couldn’t put the ball in the back of the net and we couldn’t create as clearer cut chances as wanted to, so we didn’t work the ball well enough, but we tried.”

The wintery weather caused a delayed start to the match, and continued long into the 90 minutes, presenting the young Lilywhites with a unique challenge.

First year scholar Leigh was quick to not blame the result on the elements but admitted they had a significant impact on the proceedings.

“I’m not going to blame the weather because we both had to play in it,” he added. “It was difficult - as the game went on we got used to it but the first half especially it was difficult.

Attention now turns to next weekend’s home tie against local rivals Blackpool, whom the youth side beat 6-0 in the reverse fixture back in September.

On the occasion, 17-year-old Leigh said: “Blackpool is a big game for us. They’re on a winning streak at the moment so it’ll be good to stop that and get a win in the derby, so hopefully we can get the job done next week.”