The visitors took a two-goal first half lead after the North West Youth Alliance clash had been pushed back by 15 minutes due to the wintery conditions.

The Latics extended their advantage after the break, and late goals from Mikey O’Neil and Joe Rodwell-Grant proved to be only consolations for the hosts.

Academy manager Nick Harrison made just one change to the team that last played over two weeks ago, with Kyi Nicholson coming in for Noah Mawene in midfield.

North End started brightly and had the first chance of the game within two minutes when Rodwell-Grant missed Jacob Holland-Wilkinson’s pull back from the right and Aaron Bennett fired wide from just outside the box.

Right back Josh Seary had his claims for a penalty waved away before Nicholson hit over from a few yards out whilst under pressure from a defender.

With their first foray into North End’s half, Oldham won a spot kick when left-winger Vani Da Silva was tripped. 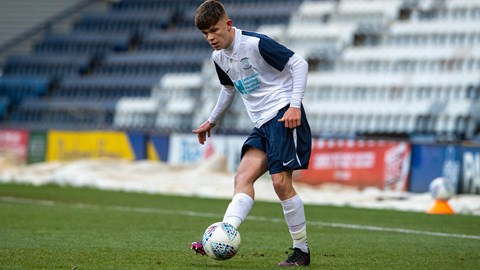 Da Silva picked himself up and sent Oliver Lombard the wrong way, placing his shot to the left side of the goal to give his side an early lead against the run of play.

Rodwell-Grant nearly secured a leveller when his shot across the goal was diverted towards his own net by the centre back, but Oldham’s No.1 managed to stop the ball on the line.

Holland-Wilkinson was next to go close, sending a left-footed shot inches wide of the right post.

As the snowfall worsened, both sides had goals disallowed for offside, before Oldham doubled their lead five minutes from half-time.

The visitors caught North End on the break and forward James Simms tapped into an empty net after Lombard had produced a good save to stop the initial effort.

There were two changes at the break with Mawene and O’Neil replacing Nicholson and Ben Dooley, and then Levi Lewis came on for Lewis Coulton, who picked up an injury shortly after the restart.

It took a great sliding block to stop Holland-Wilkinson’s left-footed strike, which looked destined for the back of the net, as the hosts looked to get a goal back.

At the other end, Lombard was keeping PNE in the game, first putting out a strong left hand to stop a shot from inside the box, and then tipping a free-kick over the bar.

He was however beaten when centre midfielder Ben Hough drove into the box and struck into the roof of the net.

It could have got worse had Lombard not got a slight touch on a low shot to divert it onto the post.

A glimmer of hope appeared when Rodwell-Grant cut out, then in, pushing the ball onto the arm of an Oldham defender and winning a penalty.

The striker’s attempt was saved but O’Neil was on hand to turn home the rebound with a smart left-footed finish.

Teddy Mfuni was substituted in place of Bennett for the closing exchanges, which saw Rodwell-Grant tap home in the second minute of added time, after the ‘keeper had spilt a cross.

It wasn’t enough for the youth side though, who suffered their first home league defeat of the season.

Harrison felt his side needed to adapt to the exceptional circumstances to have gained something from the game.

“It was horrendous conditions, especially in the first half with the snow coming down,” he said.

“I think the game ended up being a bit of a scrap and we probably couldn’t play any type of football because of the amount of snow on the pitch, but we can’t use that as an excuse.

“I think the players have got to learn to play in a different way to try and win games and try and get a positive result and that’s something we’ll keep emphasising with them.”

Both of the Latics’ first half goals came as a result of a counter attack, and Harrison addressed the need for improvement in dealing with those situations.

“In the build-up to their penalty, the players have got to learn to do better in terms of defending the counter,” he said. “We can’t afford to make silly tackles in our own box when we didn’t need to.

“It was a mistake that led to their second goal. It actually comes from us having a great opportunity to score and then they go down the other end, we make a mistake, and they get the second.

“We’ve got to cut out these little schoolboy errors because teams will punish you. I think that’s what we saw today and it was a little bit of an uphill task then from half-time.”

The Academy boss was pleased with how his players responded to going behind.

“I felt we showed great character in the second half,” he added.

“We made a couple of changes, brought some younger players on and they brought more enthusiasm to the game.

“I thought we dominated the second half and deserved to score the two goals we did, but ultimately we had three golden chances that I would expect our players to convert.