Preston North End will begin their pre-season campaign this weekend as they make the short trip to face Bamber Bridge on Saturday afternoon.

The game, which kicks off at 3pm, will no doubt be a special occasion for many as it will be the first time since March 2020 that North End supporters can attend a first team fixture.

1,300 spectators will be in attendance* for what is a sell-out at the Sir Tom Finney Stadium and the PNE fans among them will get their first opportunity to cast their eyes over some of the club's newer players.

Summers signings Izzy Brown and Matthew Olosunde could make their non-competitive debuts for the club, while January signings – the likes of Ben Whiteman and Ched Evans – will finally get the chance to introduce themselves to the Lilywhites' supporters. 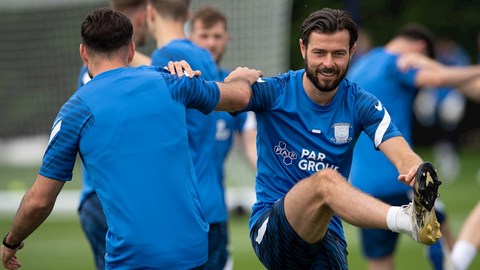 Raff Ready To Go Again After Double Back Fracture

Declan Rudd and Patrick Bauer, who both missed the second half of last season with injury, will also be hoping to feature in this one following months of hard work in recovery.

It will also be the first time the squad pull on the new 2021/22 home kit, which is available to buy now online or in-store at Deepdale!

In terms of the opposition, PNE have faced Brig fairly regularly in recent pre-season campaigns, although the two didn’t get chance to meet last summer.

July 2019 was the last meeting between the two sides, with Louis Moult and Tom Clarke getting the goals in a 2-0 victory.

Winning margins have been much more convincing in the past, too, with North End having won 7-0 in both 2017 and 2018.

Bamber Bridge will be hoping their July preparations will be followed by a full season for the first time in a few years, given that their past two Northern Premier League campaigns have been curtailed early due to Covid-19.

PNE will be Brig’s second opponents of pre-season, having faced Barnoldswick Town last weekend in a 1-1 draw.

For those supporters who have not managed to get tickets for this fixture, the game will be available to watch online, with full details to be confirmed prior to kick-off.

Important Information For Those Attending

*Supporters are reminded that, as per rules set by Lancashire County Council, they will need to provide evidence of a negative lateral flow test in order to gain entry to this fixture. Click here for more details.