Frankie McAvoy was delighted to involve some of the younger players in PNE’s first pre-season game of 2021/22 against Bamber Bridge.

Frankie McAvoy was delighted to involve some of the younger players in PNE’s first pre-season game of 2021/22 against Bamber Bridge.

The Lilywhites came out 8-3 winners against the Northern Premier League side at the club’s Euxton training ground, following the heavy rain which made the Sir Tom Finney Stadium pitch unplayable.

Involved in the friendly were scholars Lewis Leigh and Noah Mawene, who both got on the scoresheet, while fellow scholar Josh Seary and new pros Lewis Coulton and Joe Rodwell-Grant also featured.

Speaking to iFollow PNE, Frankie said: “I was absolutely delighted for the younger boys. I wanted to play them today to be honest.

“In terms of being ready to play matches, the young boys we’ve brought up for me deserved an opportunity and a chance and that’s why I wanted to play them today, and I’m going to take a few of them up to St Andrews with us as well.

“I was delighted and want to mention Noah Mawene. I thought when he came on the wee fella was fantastic. He creates two and scores one in a cameo, 25 minutes or even shorter, 22 minutes, so that was excellent for me.

“It allowed me to see Pottsy up top as well. I thought he did really, really well up front in the first period. So I was delighted all round with the young boys.

“Young Lewis Leigh, I think he got the first goal if my memory serves me right, delighted with him. Josh Seary, 16, got the opportunity and a chance to play. Lewis Coulton and then Joe Rodwell-Grant played up top as well, so there’s a lot of young players that we’ve got in the Academy and this was an opportunity and a chance for me to see them play in our environment.

“I’m a bit gutted that they couldn’t play with the fans to be honest. I was hoping the younger boys would get a chance to showcase themselves in front of a crowd, but unfortunately the pitch was unplayable, but I’m glad that we managed to get 45 minutes into everybody’s legs, and I'm just looking forward to going to play in Scotland now.”

North End headed into the break with a 4-1 lead, thanks to goals from Leigh, Brad Potts, Tom Barkhuizen and Mawene, with Josh Harrop, Emil Riis and Sean Maguire the scorers in the second half.

Bamber Bridge fought hard throughout the game and scored three great goals, with Jamie Thomas scoring a double from long range and Mark Yeates scoring a third late on.

Frankie said: “I was disappointed with the goals we conceded to be honest, that’s my first thought. I thought sometimes we were a wee bit slack, but credit to them they scored three fantastic goals, two of them were probably 25 or 30-yarders and obviously the free-kick was an excellent free-kick for them.

“But we had a lot of good offensive play, I think we probably could have scored quite a lot more, so offensively was good for us, defensively just things that we really need to work on.”

The biggest disappointment of the afternoon was the fact that supporters, who have waited a long 16 months for a chance to watch the first team, were in the end unable to attend the game due to the waterlogged pitch.

Ground staff and volunteers at Bamber Bridge worked tirelessly to try and clear the standing water, but unfortunately the conditions could not be rectified.

“Everybody was gutted,” added Frankie. “There was a lot of rain and the Academy played this morning at 10.30 and I think when that game finished at Springfields there was a lot of surface water on the pitch, so we knew it would be tough.

“The guys at Bamber Bridge worked their socks off to try and get the pitch fit and able to play, but unfortunately there was just too much rain and surface water on the pitch.

“I’m absolutely gutted that we never got a chance to play in front of the fans. I know it’s the middle of July so I never expected it to happen to be honest! There’s not much I can say other than Bamber Bridge tried their hardest to get the game going, unfortunately the game just succumbed to the weather.”

Hear much more from Frankie in his full interview with iFollow PNE. 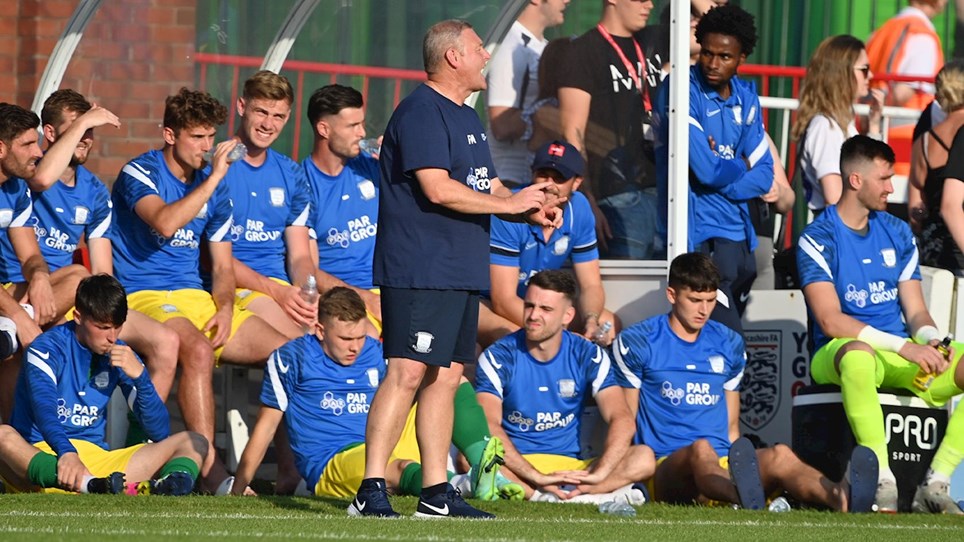 
Frankie McAvoy admitted he was disappointed by Preston North End’s first pre-season defeat at the hands of Bolton Wanderers but stressed that the priority remains building up his players’ match...