Head coach Frankie McAvoy says that all of the squad have had the chance to stake their claim for a start when the league season gets underway in a fortnight.

Head coach Frankie McAvoy says that all of the squad have had the chance to stake their claim for a start when the league season gets underway in a fortnight. 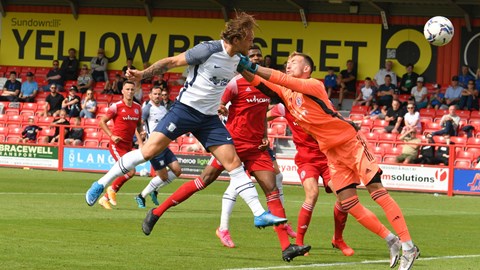 Speaking after his side’s run out against Accrington Stanley at the Wham Stadium, the Scot admitted it was now time for he and the coaching staff to start finalising what they think the starting line-up should be when Hull City are the visitors to Deepdale in a fortnight.

Having seen his side draw 1-1 with John Coleman’s men, he told iFollow PNE there were now little parts of the play that needed to be honed ready for the clash with the Tigers on August 7th.

“We did 70/20 against Bolton and it was similar today and what we need to do now is really start to put the final details in and start to work on what is the starting team,” he said.

“People know that and they understand that; no one can say they have not had the opportunity, because they have all had the same game time.

“What the coaching team and myself need to do, is hopefully pick the side that is good enough to get the result, that’s what our task is.”

The game itself was a physical encounter, with the Lilywhites taking the lead when trialist Jamie Thomas headed home Tom Barkhuizen’s delicious delivery from the right, only for a deflected effort from the home side to see the game tied.

“It was a really tough game,” Frankie reflected. “We knew that they were big, strong and aggressive and they make it really tough on a pitch that is tight, so we knew exactly what we were coming to face.

“In the first half there wasn’t a lot in the game. We both play 3-5-2; with similar types of personnel in terms of how they play.

“We made a couple of changes at half-time, as it was Alan’s [Browne] first minutes of pre-season – which was great to see. The pitch becomes a lot of turnovers and it is difficult to get your foot on the ball and play and they really press you high up the pitch to make it difficult of play football.

“We were aware of what we were coming to face, but the most important thing was getting minutes into the legs and getting ourselves ready. We have three to go with Man City, Wigan and Man Utd before we play Hull City and that is the aim; so it was good that we had a good physical work out for them today.”

The return of his club captain was something that really pleased the head coach, whilst he also explained the involvement of the trialist and goalscorer.

“I was delighted to have Alan back. He has had an issue with his hip, but he has worked hard to get back. He is a wee bit rusty at the moment, but it was really important we got him minutes. 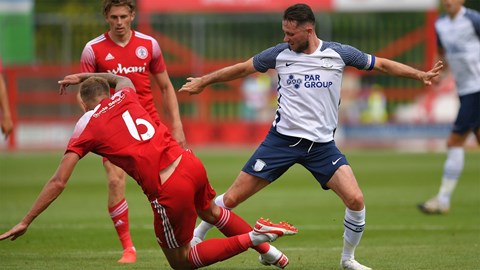 “We had Jamie, the trialist who has come in, and it was great to give him 45 minutes as well. He did really well for the goal and I was delighted for him. He deserved the opportunity and we want to give him that platform and I was really pleased he got the goal.

“He is a little bit rusty in terms of the level he is coming off, but you never know if you don’t give them the opportunity and chances and, thankfully, we have given him that chance,” he added.

You can watch more from Frankie by clicking on the video at the top of the page and also hear about his return to the side from skipper Alan Browne elsewhere on PNE.Com, with the link on the left.