Following the issues faced for Tuesday’s live stream at St Johnstone, a full review of the plans for the remainder of pre-season has taken place.

This will begin with Saturday’s game at Celtic Park, where we are being provided with a feed of the Premier Sports coverage of the game.

This will be available to seasonal and monthly iFollow subscribers, with Premier Sports’ interviews, commentary and camera coverage available from 5pm, ahead of the 5.30pm kick-off.

Due to the facilities available at the County Ground, Leyland for Tuesday night’s fixture against Bolton Wanderers, and the ongoing development at the recently announced game at Accrington Stanley on Saturday 24th July, we are unable to provide live coverage of these games, although a full-match replay with commentary and highlights will be available in the following days. 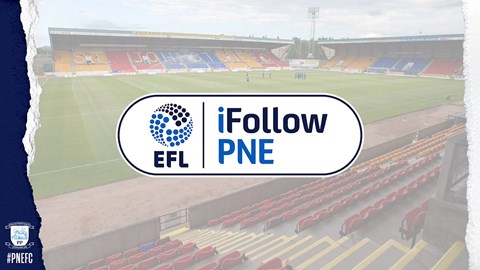 However, we have been able to confirm that we will be able to provide full coverage of the three remaining games, against Manchester City (Tuesday 27th July, 7pm), Wigan Athletic (Friday 30th July, 7.30pm) and Manchester United (Saturday 31st July, 2pm).

The Manchester City game, being played at City’s Etihad Campus, Academy Stadium, will be a six-camera broadcast on air from 6.45pm as Frankie McAvoy’s men take on Pep Guardiola’s champions.

The game at the DW Stadium against Leam Richardson’s Latics will go on air at 7.15pm, where a former player will join Guy Clarke on commentary for one-camera coverage.

Finally, in partnership with MUTV, we are delighted to be able to offer a full eight-camera broadcast.

The preparations undertaken by the club, the EFL and Endeavour Streaming to ensure, as much as possible, that the streams provided are robust and of the necessary quality to provide supporters with something of a high standard, has been extensive and we hope it can be enjoyed by fans who want to watch this way.

All the games will be available to seasonal and monthly subscribers only, there will not be individual match passes sold for the games. Click here to subscribe now.

Please note that while audio monthly passes only provide commentary during the season, they will give you video access for the aforementioned friendlies.

The ongoing review of the club's future web and streaming partners is also continuing. This process has been ongoing for some time, with a firm focus on putting in place partnerships that deliver for all supporters.