The 18-year-old, who signed his first professional contract with the club earlier this year after completing his scholarship, scored late on in the Lilywhites’ 3-2 defeat against Wigan Athletic at the DW Stadium.

After finishing coolly beyond Ben Amos from Tom Bayliss’ pass in the final minutes of the contest, in front of the travelling PNE faithful, the jubilant youngster shared his post-match thoughts with iFollow PNE. 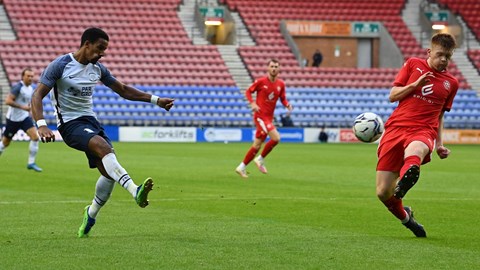 “The fans were amazing and I got a really good reception when I scored. It’s everything that I dreamed of really, since being at the club from 11-years-old, I’ve been dreaming about scoring for the club that I love and I’ve finally done it. I’m buzzing and over the moon.”

The young forward explained he has been training with the youth team in recent weeks and first learned of his involvement in tonight’s game from Academy Manager Nick Harrison.

“I’ve been with the youth team, working hard with Fenners, Matt Craddock and Nick. I’ve been really putting it in this pre-season and obviously I’ve reaped the rewards of that with today taking my chance. I’m really happy with that.

“I got a text from Nick Harrison yesterday, saying that I was going to be part of the squad. I just prepared from there really. I’m absolutely buzzing today to score my first senior goal for the club.

“I didn’t really expect to score but I was always thinking about it. Tom Bayliss played a really good pass into me and I just composed myself and just slotted it into the corner. I’ve been working, doing extras after training and stuff, so it has paid off.

“I’m just going to carry on doing that, keep my head down, keep working hard and we’ll see what happens.”

North End have recently confirmed their involvement in the Central League for the forthcoming season, which Joe is confident will provide him with further opportunities to develop and impress.

“It’s really good for my development being in the Central League,” he continued. “It’s a good opportunity for me to impress, get match fitness and get more experience of playing against professionals, experienced professionals.

“I’ll be looking forward to trying to play in the Central League and the first team as well.”

On what he aims to do now, the forward added: “Seeing where my hard work can get me. It’s got me this far already so I need to carry on working hard and we’ll see what happens from there.”

Watch Joe’s post-match thoughts in full by clicking on the video above.