Summer signing Matthew Olosunde is our cover star and featured interview in this weekend’s matchday programme for the pre-season friendly against Manchester United.

North End’s new defender grew up in the United States and his first chance to play football in England was with Saturday's opposition, who he joined in 2016.

He would go on to stay at Old Trafford until 2019 and within that time earned himself a place in a couple of first team matchday squads.

Speaking to The One And Only, Matt said: “It was pretty surreal; it was a bit weird coming to England. Playing football in England isn’t really something I thought I would be doing really, it was never really part of my plan, but it was exciting definitely.

“I did live away from home already to be fair, but it wasn’t across the water, so it was a bit different! 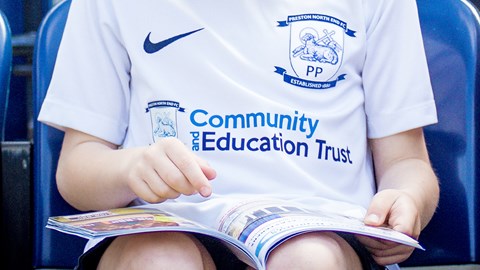 “When I joined United I didn’t really play with the U18s, I was kind of just straight with the U23s since I was just turning 18.

“Scott McTominay was there, Marcus Rashford was there for a couple of weeks and then he blew up! Cameron Borthwick-Jackson played, but he’s not there anymore either.”

There’s loads more content inside the 68-page programme, including an interview with Ben Whiteman, a welcome back from head coach Frankie McAvoy, a round-up of our pre-season games and much more.

Programmes will be sold on the day at Deepdale, but supporters can also order this edition of The One And Only straight to their doorstep by ordering through this link.

Please note, this programme is using the same design as the 2020/21 campaign, but a fresh new design is on its way for the start of the new Championship season.