Speaking after signing a permanent contract at Preston North End, Liam Lindsay said it was always his intention to return to the club following his loan deal last season.

Speaking after signing a permanent contract at Preston North End, Liam Lindsay said it was always his intention to return to the club following his loan deal last season.

The central defender has arrived on a two-year deal from fellow Championship side Stoke City, who Liam featured 23 times for after joining from Barnsley in 2019.

It was deadline day the last time Liam joined PNE, but this time things have been done much earlier - on the first day of the transfer window.

Speaking to iFollow, Liam said: “I’m delighted and just happy it’s been done so quickly as well. I always wanted to come back here and I’m just looking forward to the season ahead.

“I got a good feeling as soon as I came really – the players, staff, just everyone about really. I’ve enjoyed my time so much over the last six months, and I’m delighted to come back.

“[When I signed] on deadline day, it was a bit hectic, so it’s better to get it done on the first day rather than the last now. It gives me a bit of clarity and a bit of stability as well, so I’m just happy to get it done.”

Liam made 13 appearances for North End in the second half of the 2020/21 season after not appearing in the first few months of the campaign at Stoke.

The chance to challenge for first team Championship football again was a key factor in the Scottish defender signing for PNE, and he played a big part especially in the end of season run-in under Frankie McAvoy as head coach. 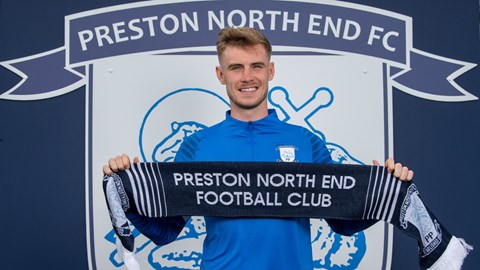 “I thought I did okay,” added Liam. “Frankie’s little run that we went on when the team was winning and drawing, keeping the losses to a minimum was good, so I think I did okay, but I think this season is a big season for me and I’m looking to improve.

“I think Frankie did an amazing job when Alex [Neil] left. He galvanised the squad and we’ve got a good bond with him and the staff, so of course it’s a massive part.

“He actually phoned me this morning seeing how I was and just saying how much he wanted me back so that obviously has to lift your confidence. I’m just buzzing.”

Liam’s time at Deepdale has so far been spent playing in front of an empty stadium so, assuming that supporters are allowed to attend fixtures, he is looking forward to introducing himself to the PNE fans.

He said: “I’ve heard things about it, and I’ve played against Preston for other clubs, and it’s a great stadium. The fans add to that so I’m looking forward to it.”

The North End squad are back in training at the beginning of July ahead of a trip to Scotland to face St Johnstone and Celtic – the latter in particular is a fixture which has caught Liam’s eye.

“They had a poor season last season but they’re winners and that’s the kind of teams you need to be playing against to judge yourself.”

Watch Liam’s full interview with iFollow by clicking play on the video above.