So far, Preston North End have had seven players who have completed 400 league appearances and the sixth member of that unique club was Joe Walton.

A Lancastrian through and through who was as wholehearted and dependable as you would want any player to be.

Walton played all his early football in and around the Manchester area before eventually being spotted by Manchester United.

As a schoolboy, he had represented Manchester Schools, Lancashire Schools and even had trials for England Schools, so he was obviously an emerging talent.

As soon as he was old enough, he signed for United, but of course at that time, 1943, the war was on and, like many other footballers, his professional career was hampered.

But Walton did make appearances for an FA XI during those years, versus the RAF at Portsmouth, versus The Army at both Stoke and in Dusseldorf, before then resuming his professional career in 1946.

He made 21 appearances for United’s first team, but could not quite win a regular place in the line-up, and that was what he desperately wanted.

So, when North End came in with a tempting offer, he did not hesitate and signed on 12th March 1948 for a fee of £12,000. He made his North End debut the next day in a 2-0 win at Sunderland and completed 11 games before that season was out.

In those games, Walton scored two goals from the penalty spot, nothing too amazing in that, but he then had to wait 11 seasons before he scored again!

He was so consistent in his full back role and he was to go on to form a superb full back partnership with Willie Cunningham. They made 250 of their appearances together, which helped North End to form some memorable years.

Initially though, he partnered Bill Scott or Willie Brown, but in his first full season North End were relegated to Division Two. 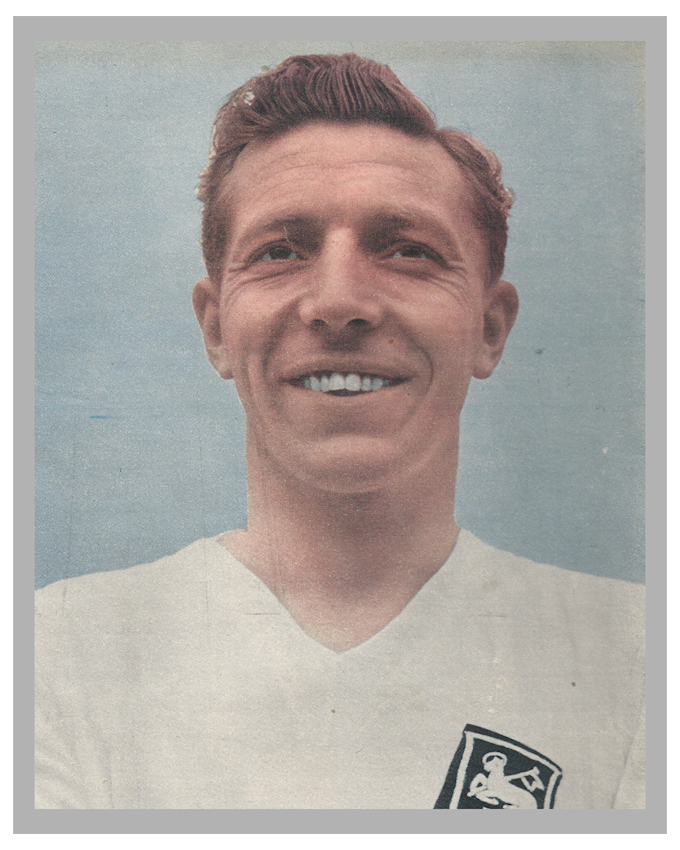 Cunningham was then signed and it became a permutation of two from three over the next three seasons. North End won promotion again and came oh so close to a league championship in 1952/53.

Walton was third choice for much of this time, but just after the start of the 1953/54 season Scott was dropped and this time Walton held his place. That season the Lilywhites had another near miss when they lost the FA Cup final at Wembley to West Bromwich Albion, with Walton giving his usual steady display in the big match.

In his time at Deepdale, Walton was often captain of the team and he earned huge respect, not only from his team-mates, but also from his many opponents. He missed just nine games in his last five seasons, but the end of his North End career finally came in February 1961.

He did start the season in the team, but manager Cliff Britton decided to make changes after a 5-0 thrashing at Burnley and Walton was dropped.

He never regained his place in the team and he was sold to Accrington Stanley for the odd amount of £1,590. Odd because the fee was paid in four instalments, one at £240 and three others at £450.

Joe Walton was a magnificent player and the epitome of loyalty to Preston North End; they broke the mould when they made him.