Alex Neil made no excuses for his side’s 1-0 defeat to Luton Town and admitted his side haven’t been good enough in recent outings.

Alex Neil made no excuses for his side’s 1-0 defeat to Luton Town and admitted his side haven’t been good enough in recent outings. 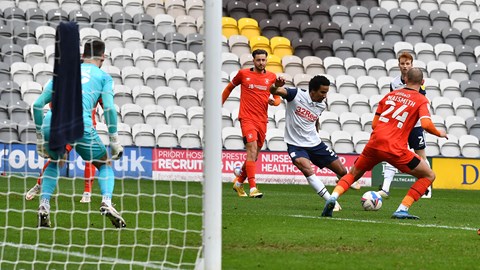 The Lilywhites lost out to James Collins’ 83rd-minute goal after a tight game at Deepdale.

“We had a couple of little errors that we got away with. I didn’t think there was a lot of opportunities in the game to be honest. What happens is at the moment for us, if there’s a goal to be scored, we seem to find ourselves on the wrong end of it.

“I didn’t think there were many chances for both teams, but when the goal had to come about, they got it.”

The manager said he couldn’t fault his players for effort but said a lack of fortune couldn’t be excused for the recent form.

“We haven’t lacked effort, the boys are trying, so I’m not standing here saying that they’ve gave up, that’s not the case at all. But we haven’t done well enough recently to win enough football games.

“You can dissect and read into that as much as you like, but we’ve lacked quality on occasions when we need to maybe produce a bit for the goal. We’ve conceded some really cheap goals, bad decision-making. We just haven’t done well enough.

“I’m not going to stand here and blame luck, we just haven’t done well enough, it really is as simple as that. I haven’t got any excuses for you where I can turn around and say, ‘It’s this, that and everything else’.

“If you’re just looking at purely the game performances, trying to win of late, we just haven’t done well enough, and that’s it in a nutshell.”

Alex welcomed back Ryan Ledson into the starting line-up for the Hatters’ visit and he said the midfielder’s presence has been missed of late.

“I think sometimes people read too much into the quality of players that have left, but also characters, the dynamics of the changing room’s completely different. Guys are trying to find their feet.

“I want to make it really, really clear, I’m not for one second talking purely about the guys that have just come in the building. The guys who are currently here have been here for a long time, they’re the guys who need to step up and take the mantle.

“They know what this club’s about, they know how we’ve worked for three-and-a-half years. This isn’t something that all of a sudden, I’ve just appeared and it’s not quite worked, we’ve had a real good, steady, solid base for such a long time and at this moment in time, that’s just unfortunate not being there.”