Oliver Lombard admitted the 90th-minute equaliser the youth side conceded in their 3-3 draw at Shrewsbury Town was ‘hard to take’.

North End produced a spirited defensive performance having taken the lead for the second time in the match to go 3-2 ahead. 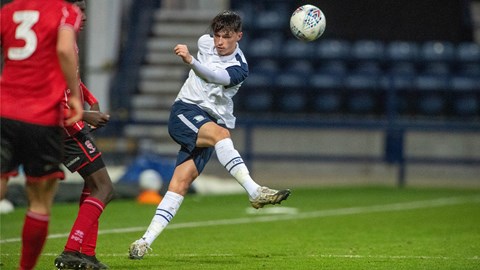 It looked like they would pick up all three points in the North West Youth Alliance league clash, but a cruel blow late on meant they brought just the one point back from Shropshire.

“It was disappointing to concede so late and in the way we conceded,” the goalkeeper said. “After going 2-1 down, getting back to 3-2, and then having chances to make it 4-2 and to score late on, it was hard.

“Wanting to win and then you just lose that at the very last push, it was hard to take.”

The 18-year-old produced several saves in what was a frantic second half, which saw his goal bombarded with efforts from the hosts.

The pick of the bunch came just before the heartbreaking sixth goal as he flew down to his left to divert a shot onto the post and out for a corner.

“It was just constant shots at you, just shots from everywhere,” he added. “I was having to stay concentrated – the pressure was always on, we were on the back foot for a lot of the second half and especially at the end when the box was crowded with players at corners. It was difficult.

“I think I had a lot of good saves to make and I took a few crosses, punched and caught them quite well, but I think one of the best things was starting a couple of counter-attacks off throws.

“There was one at the end where Dana [Amaral] got in from it and could’ve scored. I just saw him running and threw him in.”

It would’ve felt like two points dropped for Lombard and his team-mates at the final whistle, but their performance was full of encouraging signs.

“We scored three good goals which is always a positive,” he added. “We’ve had lots of chances and we worked the goals well.

“We got into the assist zone areas and we scored good, passing play goals.”