The starting XI for Tuesday afternoon’s away fixture featured five U16s, whilst two U15s were also introduced from the bench. 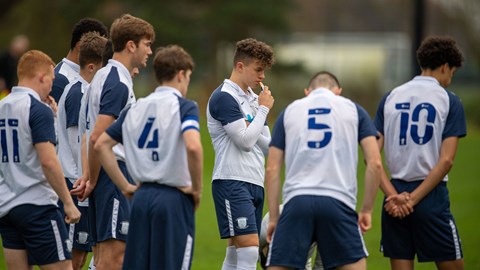 The young Lilywhites didn’t gain the result they wanted, falling to a 3-0 defeat, but Green believes they can hold their heads high with how they stepped up to the challenge.

“I think the younger lads, the 15s and the 16s, I think they did themselves proud when they came on,” he said.

“They were quite sharp from what I could see, and they dealt with the physicality very well which I thought was good to see.

“[Carlisle] didn’t really try to play that much, so the young lads should maybe have used their quality and then we could’ve got some goals out of it, but it was good to see them get some game time.”

North End had a bright start in Cumbria and could’ve taken the lead when Jacob Holland-Wilkinson’s headed effort was saved well, but they went into half-time behind and despite fighting to get back into it, they couldn’t salvage anything from the game in the second 45.

“I thought it was a game that could’ve gone pretty much either way,” Green added. “They took the chances from probably our mistakes.

“I didn’t think we looked like scoring other than Jacob’s chance in the first half. If we had taken that I think the game could’ve been completely different because we would have been on the front foot.

“I didn’t think we had any other big clear-cut chances and they didn’t look like scoring apart from when we gave the ball away, so it was kind of even as whole, but they took the chances and we didn’t.”

The first year scholar is usually deployed in the frontline but started at right-back for the encounter with the Blues.

On the position change, he said: “It sounds weird as a forward, but I don’t mind defending, I like it.

“I don’t think I’ve played that position for over a year and a half, so it was a bit like, ‘Where do I go, when do I step in’, but I thought my defending was good.

“In the first half, I didn’t play forward and I was driving inside and on two occasions I lost the ball when doing that, but that’s something I can learn from so it was a good experience.”