A late equaliser denied the youth side all three points in a thrilling 3-3 draw at Shrewsbury Town.

North End took an early lead through Josh Seary but were pegged back by half-time after right back Jamie Spiers finished from inside the box.

The Shrews went ahead shortly after the break but Jacob Holland-Wilkinson scored an equaliser soon after, and Noah Mawene thought he had won it with his poacher’s goal, but the victory was snatched from the young Lilywhites’ hands at the death.

Seary and Mawene were the two midfield changes to the team from the midweek win against Tranmere, with Teddy Mfuni also coming in at the back.

The visitors were rewarded for a bright start in Shropshire when Aaron Bennett capitalised on a loose touch and played through Seary, who pushed into the box and slipped the ball past Jaden Bevan in the hosts’ goal.

Holland-Wilkinson will have felt he could’ve doubled the advantage when he took Mikey O’Neil’s pass smartly and worked an opening, only to shoot straight at Bevan.

Spiers drew his side level just before the half hour mark, powering a strike into the back of the net after he’d been played in on the right side of the box.

As half-time approached, striker Tom Bloxham tried his luck after turning onto his right foot on the edge of the box, sending his dipping effort just wide.

There was an instant setback for the young Lilywhites in the second 45 when Nigel Aris’ deflected shot went in, despite the best efforts of Joe Blanchard and Mfuni.

They were straight back in it though five minutes later thanks to an impressive attacking move. Mawene flicked the ball around the corner to Green, who drove forward and fed Bennett in the box. He crossed low to Holland-Wilkinson, who tapped home.

At the other end, Blanchard got back in the nick of time to block Charlie Caton’s attempt away for a corner.

The resulting ball in caused danger in the PNE box and Oliver Lombard was on hand to save point-blank from Spiers, and then also claim Edan Sears’ shot.

The pressure stayed high but the defensive resolve remained, with Blanchard this time clearing off the line with his head.

The end-to-end action didn’t let up and Mawene was next to go close. Levi Lewis smartly took a free-kick quickly, chipping it into the box, but the youngster couldn’t keep his volley down. 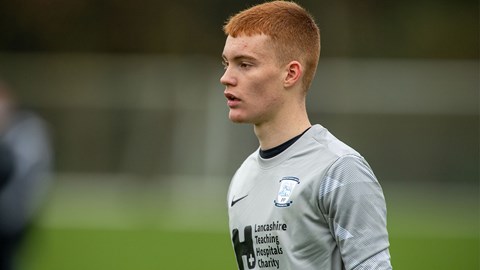 Equaliser Hard To Take For Lombard

He didn’t have to wait long to make amends though. A corner was taken quickly to Green, who floated a cross to the back post, where Seary headed back into the six-yard box. Holland-Wilkinson stabbed it goalwards, and Mawene was quickest to react as he prodded in to give PNE the lead for the second time.

The next change for the Lilywhites saw Lewis replaced by Lewis Coulton at left back, who is building up his game time after a spell on the sidelines.

Shrewsbury continued to bombard the North End goal and Sears went close again, hitting the post with a header.

Dana Amaral came on for Bennett and was straight into the thick of it, going into a 50/50 with William Thomas, which saw the latter sent off for a second bookable offence.

An inspired Lombard produced heroics to protect the lead as the clock ticked down. First, he threw out a strong hand to stop Aris’ fierce shot, and then he flew sharply down to his left to deflect what looked a certain goal onto the post.

North End looked to counter after the corner was claimed by Lombard. His long throw played in Amaral, who sprinted into the box, but put too much on his chipped effort.

The visitors were then dealt a cruel blow in the last minute of normal time as another Lombard save fell back to the striker, and he netted to ensure it was honours even in the North West Youth Alliance league.

Despite heartbreak at the end, Academy manager Nick Harrison was delighted with how his side performed.

“I think we’ve got to take the positives from the game, I think we do,” he said. “We created a number of really good chances. We score three goals, and two of those coming from two U16 players.

“We’re probably three senior players injured, and I thought all in all it was a large part of the game where we played really well.

“The way that they played and passed the ball and created the chances is the right way to develop players at the level that we’re looking at, and I think they did that in abundance today.”

Although conceding three goals would’ve been a disappointment for the young Lilywhites, their defensive performance was one that they can be proud of, and also one that Harrison feels will serve them well in the future.

“Credit to Shrewsbury, they made the game really difficult, were very direct and played to their strengths, and created a number of chances, but I’m pleased with the way that the boys defended at times.

“We brought a couple off the line, Oliver Lombard also made a few saves, which is sometimes what you have to do so I’m pleased in terms of that.

“It’s obviously disappointing that we conceded in the last minute. I think the players have got to learn to go to an away game, a long trip, winning the game 3-2, they’ve got to learn to see that out, and for the most part they did it’s just when it really matters in the final minute.

“The message at the end was very positive, and hopefully something that the younger players, like we’ve got two young first year scholars at the back at centre half, and that’ll be a game that they can learn from. Definitely a game to learn from.”