Noah Mawene maintained a modest outlook after his hattrick helped Preston North End U18s to a resounding 6-0 away victory over Accrington Stanley on Saturday.

The schoolboy, who is the son of legendary Lilywhites defender Youl Mawene, struck three to take his tally to five for the season in competitive action – with Joe Rodwell-Grant, Ben Dooley and Aaron Bennet registering a goal apiece as well. 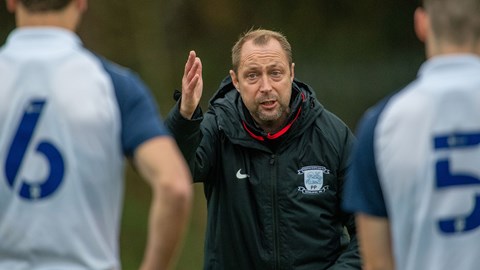 But the youngster heaped praise on his team-mates after the win; not only for their line of supply which allowed to help himself to a hattrick, but for how they have welcomed into the youth team fold this term, too.

“I’m just trying to apply myself the best I can. I got lucky with the three goals!” said Noah.

“The first one was from Levi getting into the assist zone, I was on the cutback, and it was just a side-foot into the back of the net; it was well played by Levi.

“The second was Joe Rodwell-Grant who cut it across and I was inside the six-yard box to tap it in, and the final one was from Ben Dooley’s cross, I’ve just flicked it on and it’s fallen into the back of the net.

“It was strange because I’ve never actually scored three goals in a game for Preston! It motivates me to want more. I can use it as a base to go on and keep trying to score goals.”

The comfortable victory arrived off the back of defeat to Fleetwood Town a fortnight ago.

Noah continued: “Every time we’re playing games recently, we outrun our opponents. When we lost to Blackpool and then Fleetwood, it’s a reality check that actually we needed to sort things out.

“It’s a clean sheet, a lot of goals and good football – it was exactly what we needed.”

The youngster now feels he is having more of an impact in the U18s set-up thanks to the support of his team-mates throughout the campaign.

“It was a slow start to be honest – I was still finding my feet at the start of the season with the U18s. Now that I’ve found my feet, I can express myself with everyone, it’s becoming easier. In terms of end-of-season goals, it’s just to enjoy it and see what happens.

“We’ve got a very strong team and a lot of really good players in the squad. It’s a pleasure to play with them and they’ve made it really easy for me when I’ve come in, especially as an U16 player. I can’t wait for next weekend.”

Finally, Noah spoke of how his love for getting on the ball has led to him taking up a midfield role, rather than the defensive one in which his dad earned iconic status at Deepdale.

“I just play in my style and express myself in my own way. My dad gives me advice here and there, we go through games and he’s taught me what to do in which position. I haven’t necessarily copied his playing style.

“At grassroots, I played all over the park – striker or centre back mainly. But in my first game for PNE, I played as a defensive midfielder and that’s when I thought, ‘I love this position’. You get so much of the ball and I love having it at my feet.”