Teddy Mfuni said the determination of the youth team was key in helping them to secure a 4-1 victory over Port Vale in the North West Youth Alliance league. 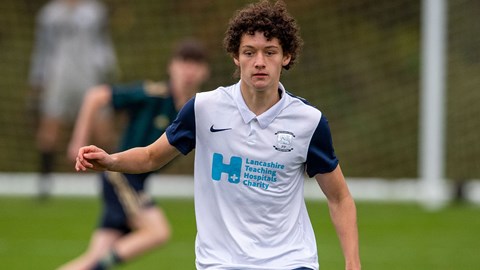 An own goal from Will Tams broke the deadlock early on for PNE before goals from Mikey O’Neil and Vaughn Green wrapped up an impressive display from the Lilywhites.

Speaking after the game, Teddy said: “I felt like we deserved the victory today simply because we were more determined, I think that was clear to see when we conceded the equaliser, it only seemed to raise our motivation higher.

“I thought the team had a good game today and everyone really played their part, individually I also believe I played well and played my part for the team, especially at the back playing alongside Harry, who I have a very good understanding with.”

Mfuni believes the recent turnaround in results is down to team spirit and how the team encourage and motivate each other.

“Since the last defeat, we have been encouraging one another and we have a goal to win all our games towards the end of the season, this is something we think we can achieve and if we keep encouraging each other and believing in each other, then I think we will get there.”

“If everyone at the club can stick together and keep only positive thoughts, no negative thoughts, then I think we will continue to do alright because that’s been one of our keys to success so far, believing and encouraging each other.”

The defender has been pleased with how the team has performed in both defence and attack in their two consecutive victories but said he and his team-mates will keep working hard on the training pitch.

He added: “We have to take the positives from the past two games and performances, we have been scoring a lot of goals and the defence has also sharpened up since the last defeat.

“If we can continue working and improving on the plans and ideas we have in place then we can definitely finish the season strongly. It's all about keeping positive and staying in a good mindset together as a team.”