One of PNE's favourite sons, Lee Cartwright, is the latest member of PNE's '300 Club' which we're taking a closer look at, and he certainly served the Lilywhites well, spending 14 seasons at Deepdale as a professional.

He originally signed as a youth trainee and quickly made an impression coming through the ranks, signing full professional terms in July 1991.

He had already made his first team debut four months earlier as an 18-year-old at Shrewsbury on March 2nd 1991. It was a terrific debut too and at the end of the match the reporter in the local paper wrote: “And remember the name of Lee Cartwright, you are going to hear a lot more about this lad.”

And we certainly did, because the start of the 2003/04 season heralded his 13th season as a full professional with North End.

After his debut, Cartwright was an integral part of the squad under a succession of different managers. He never gave less than 100 per cent effort and only some serious injuries put a slight damper on his career.

His pace and work rate were his best assets and he filled most of the positions down the right side for PNE.

His bad luck with injuries would have crushed a lesser player, but Cartwright had a determination that belied his baby-faced looks.

The 1995/96 season saw a prime example of his courage. He was playing at the top of his game at the time and PNE were heading for a division three championship, but Cartwright suffered a dreadful knee injury in a match at Scunthorpe in February 1996. The diagnosis was a year out of the game.

In fact, the player returned to the team 11 months later and played in most of the last third of that season, such was his good form. It was typical of his determination. And, because he was an adaptable footballer, Cartwright was named as substitute a record number of times for PNE. 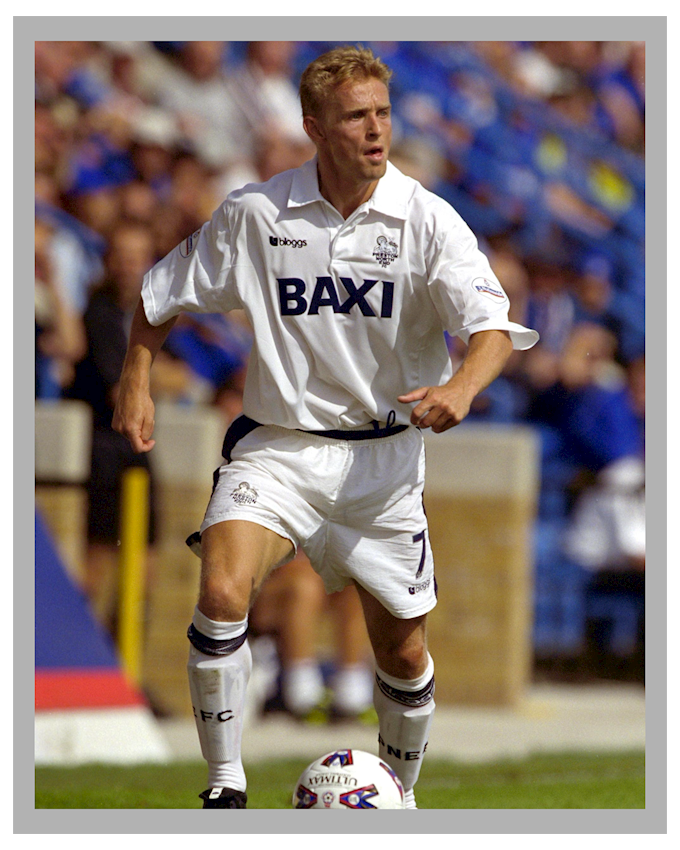 Even when he was slightly off form, each manager in turn recognised that he could turn a game when called upon. By no means was he a prolific goalscorer, but he always weighed in with important contributions.

He played a huge part in both of the promotion campaigns of 1995/96 and 1999/2000 and was awarded the official Player of the Year trophy for the 1991/92 season. It was often said that when Cartwright played well then usually North End did too.

He was awarded a very deserved testimonial match against Middlesbrough in August 2001, but he found the adulation difficult.

This quiet and unassuming player has won many admirers over the years, but he preferred to just get on with it and help the club reach as high a position as possible.

In his later seasons at the club, his appearances became less and less and this proved frustrating for the player.

He was determined to play first team football and in January 2004 his long association with Preston North End finally came to an end. A deal was reached with Stockport County, who signed Cartwright on a free transfer, a gesture from North End which rewarded unstintingly loyal service.

Cartwright still had a lot to offer and the Stockport fans were delighted with their new signing. He was certainly much missed at Deepdale.

More profiles looking at those within PNE's '300 Club' are on their way in the coming weeks, so keep an eye on PNE.Com to ensure you don't miss anything.