Daniel Johnson felt the manner in which Preston North End were beaten by Nottingham Forest was ‘not acceptable’.

Daniel Johnson felt the manner in which Preston North End were beaten by Nottingham Forest was ‘not acceptable’.

The Lilywhites were on the wrong end of a 3-0 scoreline at the City Ground, with goals from Lewis Grabban either side of Jack Colback’s volley giving the home side all three points.

The first of those goals came from the penalty spot, after Ben Whiteman was adjudged to have made a foul in the area, but Johnson – captain for the day in the absence of Alan Browne – feels his side could have had one in the first half too following a foul on Emil Riis early on.

“I think we’ve got to do better; we have to do better. Saying that, I think obviously them getting a penalty didn’t really help, but we should have got one, but that’s how it goes.

“The second goal is kind of a killer really, but saying that Brad [Potts] obviously had an unbelievable chance just before half-time to get us back in to it and that’s football. He misses it, unlucky, and we’ve got to go again. But I think to describe today I’m just really, really angry.”

Coming out after the break two goals down, PNE lined up the same as they started, but a double change was made on 56 minutes, with Greg Cunningham and Scott Sinclair coming on for Josh Earl and Brad Potts, and that brought a change of shape for Frankie McAvoy’s men.

DJ felt North End stepped up their game after those changes, but lacked that bit of quality in the final third.

“I felt like it was coming because they were really pinned in, we kept them in and they didn’t have an attack apart from when they managed to get the ball up the pitch, it stuck for them and they went on an attack and they get the goal that kills the game.”

The Championship will now take a break for two weeks, with international football taking centre stage, and North End return to action on 20th November when Cardiff City come to Deepdale.

Johnson – who will not be going away with Jamaica this break – is already looking at that game as a chance to make up for Saturday’s display.

“We have to [put things right],” he affirmed. “Especially with it being at home as well, we have to go and put things right and try and go and win the next game, because we know the Championship’s relentless and games come thick and fast.

“You lose two games and you can find yourselves looking down there so we have to go and put things right and go and get three points in the next game.” 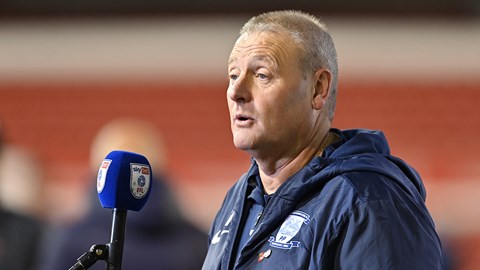 It’s been a busy week for North End, with the victories against Luton Town and AFC Bournemouth, culminating in Saturday’s trip to the City Ground.

During that time, PNE have been backed in numbers, with over 300 making the long journey south on Wednesday night and 1,917 watching on in Nottingham.

DJ added: “Credit to them. Obviously a few of them came to Bournemouth which is such a long way, and even today it’s about a two-and-a-half journey so credit to the fans.

“It’s always a pleasure to see them travel away with us and come and support us, but we let them down today and we let ourselves down today. We’ve just got to dust ourselves down, have a good break and get ready for the next one.”

Watch DJ's full interview on iFollow PNE at the top of the page.