Frankie Disappointed To Be Undone By Set Plays

Frankie McAvoy described his reaction to Preston North End’s defeat to Cardiff City at Deepdale as one of ‘bitter disappointment’.

Frankie McAvoy described his reaction to Preston North End’s defeat to Cardiff City at Deepdale as one of ‘bitter disappointment’.

Sean Maguire scored inside 90 seconds to give PNE a perfect start, but second half strikes from Mark McGuinness and James Collins gave the Bluebirds the three points. 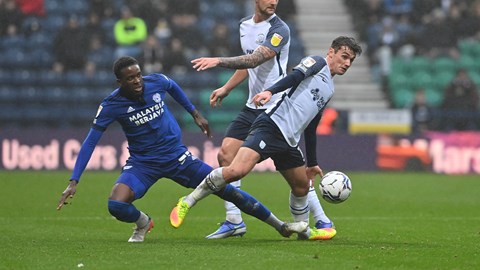 With Frankie having felt the Lilywhites had defended well from set pieces not only in the first half, but throughout the season, he was particularly disappointed that Cardiff’s two goals came from a free-kick and a corner, respectively.

Asked by iFollow PNE for his reaction, Frankie said: “It’s one of total, bitter disappointment to be honest.

“I thought we started really well, got a goal early from a set play, and we looked in good fettle, I felt we looked a threat and the only thing we really had to deal with from Cardiff in the first half was dealing with long throws and corner kicks, which is their forte, they’re very, very good at that to be fair to them.

“We just needed to try to get that second goal in the second half. They’ve made one change and brought James Collins on, they started to put things very direct, very forward and in and about our areas and put us under a bit of pressure. We weren’t strong enough to try to stand up to that.

“We’ve been done with two set plays, one with a wide free-kick, where Sepp’s been done by McGuinness at the back stick, and then Collins has scored from a corner. That’s disappointing for us because that’s the first corner we’ve conceded this season in the league and in the main we do generally defend very, very well.

“For me, we had the game and we had the points and we’ve lost them, myself and the group, and that’s what’s bitterly disappointing. I felt the fans were great, all the way through it, even when we were under a bit of pressure, you could hear them trying to will us on, so I’m bitterly disappointed for everyone.” 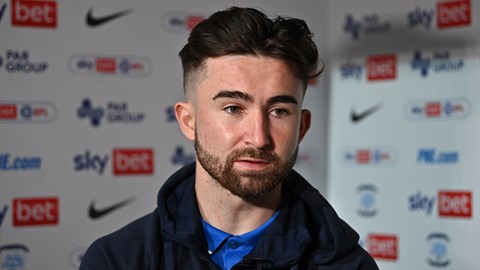 Frankie felt North End might have extended their lead further in the first half but was hoping for his team to create more clear-cut openings after the break.

“We had a couple of decent opportunities, one where Emil breaks forward into the box, and then one we worked down the left-hand channel where it’s cut back and Ali has the strike and the goalkeeper makes the save.

“Then we had a few more opportunities coming in from set plays. But goals change games. The areas that we’ve done generally well in defending, corner kicks in the main, has undone us today. We need to be better than that, we need to be bigger and stronger.

“When you’re winning 1-0, you need to be brave on the ball, it’s not just a case of if you’re under a wee bit of pressure then we just lump it forward and hope it can stick.”

On the second half, he added: “When you’re 2-1 down because you’re then chasing the game and you leave yourself a bit vulnerable. We changed the systems again, you’re hoping you don’t have to do that. The bitter disappointment is half chances maybe were created if I’m being brutally honest.

“We were hoping that we could have got a few clearer cut chances, ones we got just down the sides of them to try and cut things back and a few sniffs, a few crosses going into the box. In the main, when you concede goals when you’re winning the game through set plays, it’s going to be tough, we need to be better at that.”

Frankie said his side have to dust themselves down as they move on to facing Middlesbrough on Tuesday.

“We’ll do the same as we always do, dust ourselves down after this one, which is bitterly disappointing losing, particularly at home.

“We’ll look at the game tomorrow and go through it, bits we think we could have done better in, and then get ourselves prepared as best we can for Middlesbrough on Tuesday night.

“All I can do is keep giving the best I’ve got and when we get our team ready and prepared it’s hopefully to try to get better results than today because today was a bitter disappointment considering we were 1-0 up at half-time.”

Watch Frankie’s post-match thoughts on full by clicking on the video above.