The Lilywhites saw plenty of the ball at the City Ground but were beaten by Lewis Grabban’s brace, with a penalty and second half strike coming either side of Jack Colback’s volley on the stroke of half-time.

Frankie felt his side had a couple of penalty shouts that might have altered the course of the game had they been given, but didn’t do enough with the ball when they had it. 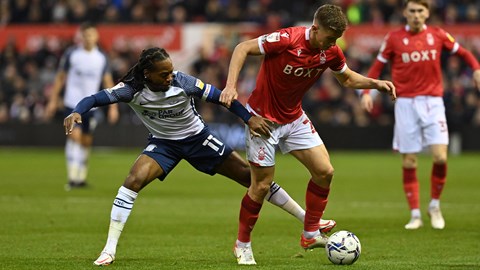 “I felt we had a good claim for a penalty in the first couple of minutes of the game with Emil, we don’t get it, and the penalty they get I can see why it’s given but I’m not sure there’s much contact.

“The second disappointing part for us is we concede from a free-kick. In terms of set plays, we’ve defended them really, really well all season. But once Josh [Earl] makes an error, we’ve got to go and stop the ball and we’ve turned our back on the shot and it ends up 2-0.

“I didn’t think there was a lot in it in terms of possession and movement and opportunities and chances, but we were a bit disappointing, a wee bit lacklustre when we got forward to be honest.

“There was a lot of times we got around the outside of them but we started to keep coming inside, particularly on the left-hand side, which was disappointing for us.”

Frankie also explained the change in shape from just after the break.

“You always look if you can maybe get the next goal at 2-0, then you just never know what can happen, that’s what we tried to do. We left it for ten minutes [after half-time] and then we’ve changed it and gone to 4-3-3 to try to be more aggressive going forward.

“We did have a lot of the ball but we never had any real cutting edge if I’m honest and that’s what was disappointing for me. We had a half shout for a penalty on the edge of the box [through Greg Cunningham], but other than that, we never really tested the goalkeeper enough for me, which was disappointing.”

The Head Coach also apologised to the travelling faithful with just under 2,000 fans packed inside the away end in Nottinghamshire.

“We were on a high, we knew there was big, big support coming and I’m bitterly disappointed that we’ve sent them home with absolutely nothing. I just felt after the win the other night we had a great opportunity to kick ourselves on and go higher up that league. Unfortunately, today, it didn’t happen.

“Even at 2-0, I always felt that we could get the next goal and get back in the game. I thought we actually started well but you just need the goal, and unfortunately, we never got it.

"The longer the game goes on, the more susceptible you become to the counter, which is where we’ve generally been good if I’m honest – on the counter – and unfortunately for us we don’t defend the first ball up [for the third goal].

“I’m bitterly sorry for the fans, they turned up in their numbers here and I was hoping we could have given them something. Unfortunately, we’ve failed again so that’s disappointing.”

He added that his team must learn from this defeat as they look to use the forthcoming international break – with no Championship game for another fortnight when Cardiff City visit Deepdale – to ease back some members of the squad from injury.

“I’m just so disappointed today for the result. We’ll dust ourselves down and give guys who we’ve got in the squad who have been injured a wee bit more time to get themselves fit and back into the fold.

“That result today is bitterly, bitterly disappointing. If we’re going to perform like that, it’s not what I’m expecting from them, I’m expecting a lot better from them.”

Watch Frankie’s post-match interview in full by clicking on the video above.