Captain Lewis Leigh admitted to feeling ‘gutted’ after PNE U19s were beaten on penalties by Burnley in the Lancashire FA Professional Youth Cup, but he is taking the positives from a strong performance.

North End hosted the Clarets at Springfields for the quarter-final tie and came off the pitch after 90 minutes frustrated they weren’t able to make their dominance throughout the game count.

The home side created an array of chances during the match, and manager Nick Harrison spoke afterwards about the lack of a cutting edge, something Leigh agreed with.

Speaking to PNE.Com, Lewis said: “I’m obviously gutted because we had more of the ball all game, plenty of chances to make that count but we just couldn’t get the ball in the back of the net.

“We weren’t clinical enough today but our build-up play was good, we kept a clean sheet and overall it was a very good performance, it was just a shame about the penalties.” 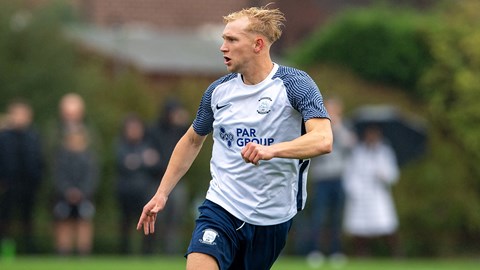 It was a shootout which cost the Lilywhites a place in the semi-finals, with Burnley coming out 4-3 winners in the spot kicks.

Central midfielder Lewis and his team-mates can take enough pride in the fact they pushed the Clarets all the way to that point, though, given they are a Category One side playing against the likes of Manchester United and Liverpool every week.

To make North End’s performance all the more impressive, they were without a number of players, meaning the likes of Izac Khan had to make the step up from the U16s.

“They played well the boys coming up to play from the U16s,” Lewis added. “Especially coming in to play against a Category One club as well, they put a big shift in and played really well.

“You’ve got to give huge credit to them because they filled in well today and hopefully they’ll do the same on Saturday against Bolton Wanderers.

“It’s always a pleasure to see them come up and perform like that because they worked really hard and did well for us today.”

Those missing this afternoon included James Pradic, Josh Seary and Harry Nevin, with all three currently away on international duty – Pradic with Wales' U17s and the latter two with the Republic of Ireland U18s.

Still though, North End made Burnley work extremely hard for the win, earning a fourth clean sheet in a row to take them to the lottery of a shootout.

“We’ve looked so defensively solid in the last four and I think we’ve scored 14 goals in that time as well which is always a positive, but we’ll learn from this today.

“It was a good performance but I think we’d better get on the training pitch and practice our penalties! Let’s see how it goes next time.”