Tom Barkhuizen admitted it was good to be back playing after a “rough couple of months”, making a return in the Central League Cup victory over Carlisle United.

Tom Barkhuizen admitted it was good to be back playing after a “rough couple of months”, making a return in the Central League Cup victory over Carlisle United.

PNE’s No.29 has been missing since the opening day of the Championship campaign, firstly due to isolation after he tested positive for Covid-19, and then came a recovery period which was made to last a little bit longer than expected.

He’s recently got himself back on the training pitch, though, and he got through the full game in the 5-0 victory over Carlisle.

“It’s great [to be back],” said Barky, in an interview with iFollow PNE. “I’ve had a rough couple of months with Covid and a few bits going on in my personal life, but it’s good to be back and nice to get my legs going again, to get back out there and do what I enjoy doing.

“I feel like when I first finished my two weeks [isolation] I thought I’d be pretty much straight back in. I was fine on the bike, it was only once I started going outside that I was just not myself and it really knocked me for six.

“The amount of times that I came in and just went home and had to take a few days off and try again, it was starting to really get frustrating.

“As someone who is naturally quite fit it was really puzzling me. I wouldn’t say it was getting to me, but frustration was starting to get to me.

“There’s not much more I could have done. I’ve tried my hardest to get back quicker and it’s just not been the case. It was just about keeping my head and knowing that eventually I will be fine and thankfully I feel alright now.”

On his return to the training ground, Barkhuizen had to go through the protocols which follow a Covid isolation period, but once things started to prove harder than expected, he admitted to beginning to worry.

He said: “To be honest for the last two or three weeks it’s just been about trying to get me outside.

“I think I tried to go outside two or three times and it just wasn’t working. I went for blood tests, lung tests, heart tests and it got to the point where I was probably getting a little bit worried that it was worse than I thought it was going to be.

“It’s all in the past now, it’s all done and dusted and thankfully we’ve got these couple of weeks with a couple of games and I can crack on. I got my first 90 in the bag and hopefully can get another one.” 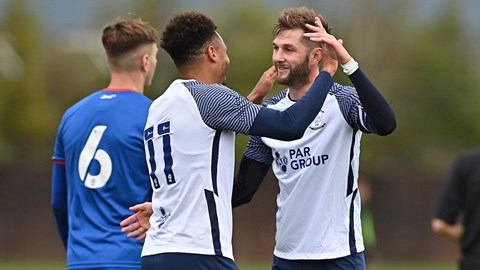 In the game itself, Barky opened the scoring in the early stages, blocking a clearance from goalkeeper Adam Smith and then tapping home into the empty net.

He then turned provider for Brad Potts, who scored a brace, on what turned out to be a comfortable afternoon against a young Carlisle outfit.

Barkhuizen added: “I think naturally the scoreline shows it was a relatively easy game for us.

“I know they brought a lot of kids and you can imagine being them, you turn up and Preston have got a full first team out effectively, they’re probably thinking ‘oh for God’s sake, here we go’.

“The second half was a bit tough. I think we had a few tired legs, none of us had played any football of late, but we did what we had to do, we all worked hard and that’s all you can do.”

This game, as well as Lancashire Senior Cup and Central League fixtures next week, give Barky the chance to get his match fitness up ahead of the return of league action.

That will come on Saturday 16th October when Derby County come to Deepdale, and he is hoping that can be the start of a good run in the side.

Barky said: “I think especially because I’ve only had the one game and it wasn’t football last season, so I’ve not really had the experience of being out there again in normal conditions.

“I can’t really remember what it’s like to have a run of games in full stadiums and things like that so just get me back out there as soon as possible and hopefully I can help the team out.”