Frankie McAvoy was left disappointed that his Preston North End side couldn’t provide the ‘fitting tribute’ to the Hemmings family that he had hoped for, as visitors Derby County held his side to a goalless draw, following Mr Hemmings’ sad passing earlier this week.

Frankie McAvoy was left disappointed that his Preston North End side couldn’t provide the ‘fitting tribute’ to the Hemmings family that he had hoped for, as visitors Derby County held his side to a goalless draw, following Mr Hemmings’ sad passing earlier this week.

An 18,000-plus crowd packed inside Deepdale to pay tribute to Mr Hemmings as North End played host to Derby County, but McAvoy’s men were unable to make the breakthrough against Wayne Rooney’s visiting Rams.

Speaking to iFollow PNE post-match, Frankie said he was ‘bitterly disappointed’ by his side’s first half display in particular.

“I knew myself when I came out, I could feel the real warmth of the support, it was a fantastic occasion. I felt the fans were magnificent and the one-minute applause was magnificent. I tried to prepare the players as best as we could, me and the backroom team, to try not to play the occasion, because sometimes you can do that.

“It has been a sombre week with everybody associated with the club.”

After admitting he could have made a number of changes at the break, Frankie said when the reinforcements did come – with Ben Whiteman and Scott Sinclair entering the fray within minutes of one another, either side of the hour – that they made a difference.

“I felt when we made the changes, particularly with Ben Whiteman coming on and Scotty Sinclair, I think they made a big impact for us. We became more of a threat in the game, we started to get on the ball a wee bit better, and switches of play was a thing we tried to work on to do that. 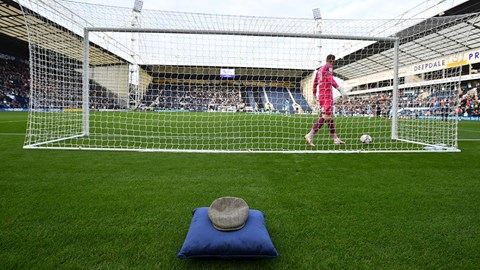 “When you work on things on the Thursday and they look good, it’s alright doing it in training, what you’ve got to do is do it on the big stage. Today the bitterly disappointing thing for me was it seemed similar to the very, very first game of the season that we played against Hull City, where it was a big, massive occasion for us, in front of a good crowd of home fans.

“We probably let everybody down and that was disappointing for me. I take full responsibility, we pick the team ourselves and the backroom team. We put our tactics in play to try to win the game. Unfortunately, today, we didn’t get it right.”

North End’s Head Coach is also looking for his side to turn one point into three more regularly, with this their sixth draw in seven league outings.

“The positive today for us is it’s a clean sheet and a point, but it’s far too many draws. We need to find a solution to try to get three points, particularly at home, and that’s what we’re tasked with Wednesday night against Coventry.

“I’m bitterly disappointed – I think you can hear it in my voice – for Mr Hemmings and his family, because I was hoping we could have given them a win. That’s what I asked for today – ‘Let’s go and win it, win it for the crowd that’s here,’ but most importantly, for a man that I would class as a legend.

“His full family were here and what we produced in the first half was nowhere near good enough and that’s what disappointing.”

Frankie added: “We’re playing at home in front of a fantastic Deepdale crowd. Sometimes the onus is on us to try to get them off their seats but we didn’t do that.

“We allowed Derby to have far too much territory in the game, coming here, and they looked a team more up for it than we were. That’s bitterly disappointing for us.”