Frankie McAvoy said that his side were ‘not good enough’ and must start performing from the start of matches after losing 2-0 to Blackpool at Bloomfield Road.

Frankie McAvoy said that his side were ‘not good enough’ and must start performing from the start of matches after losing 2-0 to Blackpool at Bloomfield Road.

Goals in either half from Keshi Anderson and Gary Madine saw the hosts take the points in the West Lancashire derby. 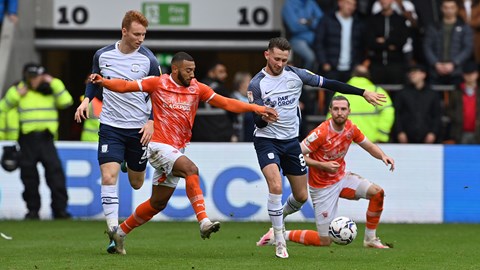 The PNE Head Coach felt his side responded somewhat at the start of the second half but admitted that that wasn’t enough, and that his side must start to show their best form from the first whistle.

He told IFollow PNE: “I knew what it meant and that’s the disappointing thing for me is that I didn’t think first half we did well enough if I’m honest.

“Second half I thought the reaction we got was a lot better. But it’s no use doing it when we’re 1-0 down, we need to do it from the beginning.

“We need to start getting our finger out because at the end of the day, we’ve only won three out of 14 games, it’s not good enough. We need to do better and it starts from now, that’s what we need do, we know exactly where we are now.”

Frankie explained the tactical changes he made in both halves, tweaking the 3-5-2 to a 3-4-3 early on before going on the offensive in search of an equaliser in the second half.

“I felt first half Blackpool were better than us, I changed the shape midway through the first half and I felt when we changed it we got a bit better. The goal is really disappointing from our point of view and they go in 1-0 up.

“We know we need to change something, do different things, get better. It was the exact same as the other night, I have the chat, the same chat that we have before it that we need to be a wee bit braver on the ball, break forward, get higher up the pitch with our wing backs and go and take the game to them. I think second half we did that.

“We have a fantastic opportunity again [through Ben Whiteman] to try to get us back in the game, which if that goes in, it could be a different story. Hindsight is a wonderful thing. The one thing is, I’m not going to make excuses about it, we had the chance and didn’t work.”

He continued: “The longer the game’s going on, I knew we had quite a lot of front players on the bench for us if we were losing the game to go and try to change it. We went to a 4-2-4 with Scotty and Tommy B both up top alongside Seani and Emil.

“Unfortunately, we get done with the second goal. I’ve seen the goal back and it’s disappointing from our point of view. I’m bitterly disappointed, I knew what this meant, I knew what it meant to the people of Preston and the fans that come, that’s the bit where I’m really so hurt for them because Blackpool has been given the bragging rights and that’s a sore one.”

Overall, while Frankie felt there wasn’t much between the sides, he said he would take full responsibility for the defeat.

However, he retains confidence that his players can start to pick up more points.

“I didn’t think there was a great deal within the game, obviously they win the game 2-0, that’s the most important thing, that’s what it is, they’ve scored the goals and we haven’t.

“There are defining moments in games and you just need a wee bit of luck at times, I felt that wee bit deserted us. At the end of the day we’ve lost the game and I was hoping we could have come here and won it. I take full responsibility. I picked the team and made the changes as well and they didn’t work for us.

“I believe with the group that we’ve got are a good group, I don’t think there’s any question about that, and I believe that they’re good enough to win games going forward.”

Watch Frankie’s full interview by clicking on the video above.