Frankie McAvoy feels the second half performance against Coventry City was possibly as good as his side have played during his time in charge.

Frankie McAvoy feels the second half performance against Coventry City was possibly as good as his side have played during his time in charge.

PNE went into half-time a goal down after Tyler Walker’s late strike in the first period, but goals from Patrick Bauer and Emil Riis earned all three points for the home side.

Speaking to iFollow PNE, Frankie said: “Tonight I was absolutely delighted. I think the second half performance was probably as good as we’ve performed in my tenure here to be honest and that was so pleasing.

“I didn’t think there was a lot in it in the first half. They were probably a lot more threatening in terms of going forward, but they’re a good team. Mark [Robins] has got them playing really, really well and we went toe-to-toe. 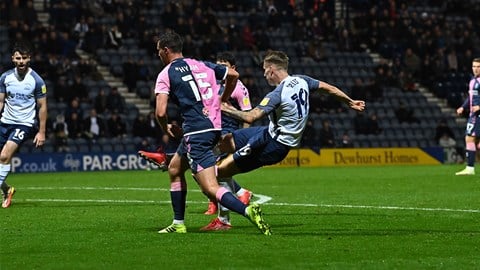 “We knew we needed to go and do that to hopefully go and win the game. I just said at half-time we need to be a wee bit more clinical, more aggressive going forward, when we’ve got opportunities and chances in and around the box we need to be clinical.

“That’s what we need to do and I’m delighted for each and every one of them. It’s not just about the 11 players that play, I’ve said this before, it’s about the whole group and that whole group in there are a good bunch of lads.

“Sometimes results might not go our way, but the one thing is that we do our utmost and our best for Preston North End Football Club.”

Tonight’s result follows the weekend’s draw against Derby County, on an occasion when the city of Preston celebrated the life of Mr Trevor Hemmings.

Frankie was open about the fact his side weren’t good enough that afternoon, though, so tonight dedicated the victory to his family.

He said: “I’d just like to say hopefully it pays a wee bit of payback for Kathryn, Craig Hemmings and the Hemmings family because we didn’t do well enough on Saturday.

“I was honest enough to admit that and I take full responsibility because I picked the team. We put the players out on the pitch, but once they cross the white line, they need to try to do their utmost and their best.

“Sometimes people can have a bad day at the office, that happens. I know there’s been a bit said about the games we’ve drawn that we probably should have lost them all. It’s absolute nonsense; it’s not true.

“What I cannot accept is to say that we didn’t deserve any games that we drew and anybody that’s an honest person would tell you that.”

Alan Browne made PNE history on Wednesday evening, making his 300th appearance for the club and becoming the 27th man to reach that milestone.

Frankie has been around for many of those games and he’s been delighted with the progress of his skipper.

He said: “I thought his performance was great. He’s a fantastic boy, he’s a player who you want in your team rather than against you and I was absolutely delighted for him.

“It was one of the things I said. It was Alan’s 300th game tonight, [so I told the players] we’ve got an opportunity as a group, don’t let him down. Let’s go and try and make it memorable for him, and I think tonight it was because they’re a good team and they deserve to be where they are.

“I’m just delighted we stuck by our guns, we played the system that we know suits us best and has served us best, and we’ve managed to turn the game around in the second half.

“I felt the second half performance, the guys were excellent and deserve the plaudits they get.”

Watch Frankie's full interview on iFollow at the top of this page.