Head coach Frankie McAvoy said the Preston North End fans were ‘excellent’ in helping his side to a well-deserved 2-0 win against Luton Town at Deepdale.

Head Coach Frankie McAvoy said the Preston North End fans were ‘excellent’ in helping his side to a well-deserved 2-0 win against Luton Town at Deepdale. 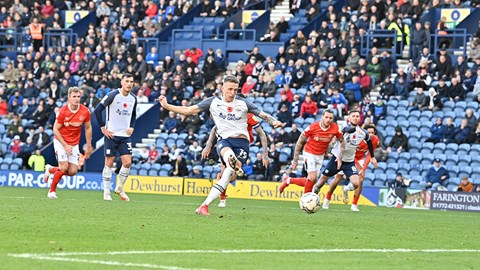 Emil Riis broke the deadlock with a stunning strike from a tight angle just after the first half’s midpoint, and the Dane doubled his and the Lilywhites’ tally before the break with a cool penalty kick into the bottom right corner.

Speaking to iFollow PNE after the game, Frankie said: “I’m delighted we managed to win the game, I felt the fans were excellent to be fair and got behind us and that’s what we need.

“We’ve done reasonably well here to be honest apart from the first game, and then the performance against Derby which was a bit stale.

“Other than that, I think we’ve performed pretty well in the main at Deepdale and what we need to do is continue to make this a really, really tough place for anybody. In the main I think the fans have done that and I want to thank them for that.”

Fresh from signing his new contract, Emil Riis’ brace secured the three points for North End, and Frankie was in no doubt that his first goal – coming from the right flank which was struck with venom to find the far corner – was intentional.

He was full of praise for his strike partner Sean Maguire, too.

“Emil’s strike was magnificent,” Frankie added. “It wasn’t a cross, believe me, as he does these things in training. He hits things from anywhere and he’s got an absolute rocket in his foot. It was just magnificent because that then settles you down a bit.

“You get a wee bit more confidence about you individually and collectively as a group. I felt you could see that within the game.

“He just needed a bit of confidence, a wee bit of belief. Sometimes players need a wee arm around the shoulder at times, we’ve given him that and he knows what we think about him, he knows that faith and trust we have in him.

“Seani deserves special mention, his link-up play was magnificent, we worked to him to try and find wee pockets and bringing centre backs into areas they didn’t want to go into.

Frankie explained that he felt deploying Tom Barkhuizen at wing back would provide his side with more an attacking impetus. 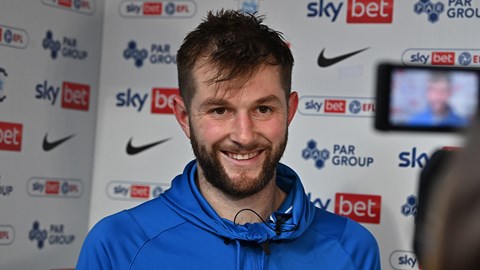 And after Luton switched formations at various points in the second half in response, the boss admitted it initially took some of time for his team to adapt, but he was pleased with how they did so.

“We knew that they would match us up in terms of our favoured 3 5 2. But I felt today we could get that opportunity to get Tommy B further up the pitch knowing that they would probably play Amari’I Bell, who’s more of a left sided defender from his days at Blackburn Rovers. We felt that would get us higher up the pitch.

“The first ten minutes of the second half it took a wee bit of time for the wing backs to tuck off the opposite side of the diamond. Once we did that we started to come back into the game and created a few good opportunities going forward. Once we’d done that they’d actually changed the system again. 2-0 is a precarious scoreline at times, the third goal in that game is always the key factor within it.

“The main point today was we needed to win the game and I’m delighted for everybody connected with Preston that we’ve managed to do that.”

The boss feels his side now head into a double header away from home before the international break, against Bournemouth and Nottingham Forest, in a good place.

“Every time you win a game you should be confident. I’ve said many, many times that I’m confident in the group that we’ve got. People will be disappointed that they’re not playing and might not be involved, but that’s part and parcel of football.

“At the end of the day, we should all be in it together, everybody pushing in the same direction for Preston North End. This is our passion and we should be proud of coming here, playing here and going doing our best away from home for the supporters that turn in week in, week out to come and support you.

“Hopefully we can start to pick up points away from home, a lot more than we have done in the league to be honest.”