Brad Potts felt Preston North End gave a good account of themselves against Liverpool in the Carabao Cup fourth round, but was left with an overwhelming sense of frustration that he and his team-mates failed to take one of their many first half opportunities.

Brad Potts felt Preston North End gave a good account of themselves against Liverpool in the Carabao Cup fourth round, but was left with an overwhelming sense of frustration that he and his team-mates failed to take one of their many first half opportunities.

The No.44 perhaps had the best chance himself when he went one-on-one with Reds stopper Adrian and drew a good save from the Brazilian, and moments later went close again – following another double save from the opposition goalkeeper – when he blazed over the bar from close range. 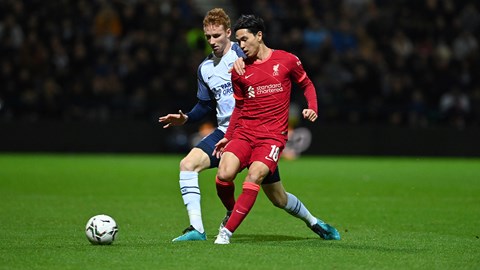 Jurgen Klopp’s side didn’t break the deadlock until after the second half restart with Takumi Minamino and Divock Origi strikes sealing Liverpool’s progression into the quarter-finals of the competition.

“It’s really frustrating,” Potts told iFollow PNE of the missed chances. “The first one I felt like I was clean through on goal but I kind of felt [Joe] Gomez catching me back up, so he probably made me rush my shot, and the second one as well. But I’ve got to score one of them.

“We knew we had to be aggressive, at times we had to sit in, but I feel like when we were aggressive, we won the ball back and we looked a threat on the counter. It was really enjoyable and it felt good to be back out there.

“On another day I think one of those chances goes in, but that’s the difference against top teams, they’re clinical and they do finish off the chances. It’s just frustrating we didn’t tonight.”

The midfielder added that the Lilywhites wanted to keep their Premier League counterparts from breaking the deadlock for as long as possible, and while they expected changes to their starting line-up, they knew they’d still be up against a very strong side.

“We knew they’d make changes, but that whoever they brought in, it was going to be a strong team. You want to test yourself against the best players so it was a good experience, it’s just unfortunate we didn’t get a result.

“Keeping them at 0-0, that’s what we wanted. When the first goal goes in, it’s a little bit deflating but you know you’re still in with a chance.

“When they scored the second, it’s probably pretty much game over. But I felt like we gave a good account of ourselves and we need to take that performance into the league on Saturday.”

Pottsy remained greatly disappointed by the weekend’s derby defeat to Blackpool and felt the display against Liverpool provided something of a reaction, but stressed the importance of now replicating their Carabao Cup display this evening back in league action against Luton Town on Saturday.

“After the weekend’s result, we needed a reaction and tonight I felt like we got that, without getting the result. As the lads have just said in the dressing room, we need to carry the performance on to Saturday’s game.”

“Everyone’s still hurting from last weekend. We were really disappointed with how it went and wanted to try to get the three points, just for the fans more than anything. It just makes Saturday even bigger so we just [need] to make sure we get a result.”

Watch more from Pottsy on iFollow PNE by clicking on the video above.