Seani: “I Felt We Did Enough To Win”

Sean Maguire felt PNE did enough to win the game against Queens Park Rangers and was “bitterly disappointed” to come away without even a point.

Sean Maguire felt PNE did enough to win the game against Queens Park Rangers and was “bitterly disappointed” to come away without even a point. 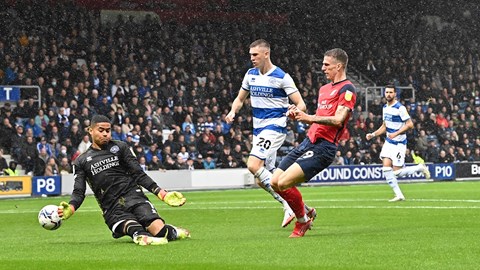 North End had got themselves into a winning position after initially falling behind early on, with goals from Emil Riis and Josh Earl, both assisted by Maguire, turning the game on its head, but two strikes within a four-minute period in the second half saw the hosts re-take the lead.

Speaking to iFollow after the game, Seani said: “I’m bitterly disappointed. I think we started the game a bit sloppy, but I think their goal was a bit of a wake up call.

“As soon as we scored our first goal I think we completely dominated the game, maybe up until they probably scored their second goal and then the momentum kind of gets them through, the crowd gets behind them, but at times I think the referee didn’t help.

“I don’t know if the crowd kind of played a part in terms of when crowds react to something and he goes with the crowd.

“We’ve got to dust ourselves down. It’s our first loss in a while but obviously we haven’t won in a while as well, but there’s a lot of positives. I’m just so disappointed because I felt we did enough to win the game today.”

The main source of disappointment probably came at the timings of the goals, given that for the majority of the second period PNE were the side well on top and could have been further ahead.

But ultimately the game switched when Jimmy Dunne equalised for the hosts.

Seani added: “When we were on top at 2-1 when we scored I think that was the time to put them to bed. I think they’ve got a scruffy second goal then momentum carries them through to the end of the game and it could have turned out differently, but I’m proud of the team today.

“I thought we did enough to win the game today, scoring two goals away from home, dominating most part of the games, and when we’re on top that two-goal cushion could have seen us through the game.”

The Irish forward had to be withdrawn due to injury after 73 minutes, but earlier in the second half he was involved in a separate incident with QPR defender Dunne near the halfway line.

Seani explained: “I think I’ve got the ball, Browney’s played a ball into my feet, I’ve won a foul and he’s come through the back of me.

“Next thing I know he’s stamped on my foot for whatever reason and I think if there’s VAR it’s an obvious red card because you’re not telling me he can’t run anywhere else apart from stamping on my leg, which is ridiculous.

“If the referee’s not seen that then probably something needs to be done, but if he has seen it and he thinks it’s not a red card then he probably needs to have a good look at himself.”

Hear more from PNE’s No.24 in his full interview on iFollow PNE.