Scottish midfielder Ali McCann impressed against Liverpool in Wednesday night's Carabao Cup last 16 tie and he is the cover star of this weekend's edition of The One And Only.

A move between clubs is something the No.13 had previously not encountered in his career, so you’d imagine a move of the best part of 300 miles would bring its fair share of challenges.

That’s the situation the midfielder found himself in when he signed for Preston North End from St Johnstone, but he feels he’s settled in really quickly and is already feeling at home. 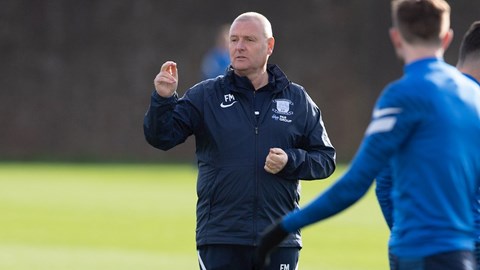 Back in Scotland, he had only just moved out of his parents’ house into a flat of his own, so he had a big job on his hands to pack pretty much his life into his car when he made the journey down to his new surroundings, almost as soon as he landed from international duty with Northern Ireland.

Signing for North End on Tuesday 31st August sat in a hotel room in Belfast, he was then soon in another temporary home when he eventually got the chance to come down to Lancashire a week and a half later, first moving into Farington Lodge Hotel.

“I was there for maybe only three weeks,” he told The One And Only. “It was weird because I was in a hotel in the international break and then came straight to a hotel here.

“The club help you out by putting you up which is great, but obviously it’s not quite the same as your own place – having to have your dinner downstairs, sitting in your hotel room, there’s not much you can do.

“But I guess you can’t really complain about that. You’ve got a roof over your head sorting you out until you manage to get your own living situation. Thankfully I’ve got that now, I’m settled and it’s good.

“My car was still just full of stuff so the sooner I got myself sorted the better, so I managed to get that done in three weeks.

“I’ve moved that all into my new place now so it feels like home. It didn’t take all that long to get settled and I’m happy where I am at the minute.”

His transfer to PNE did, of course, eventually come off, but the evening of deadline day proved to be an anxious one to see whether or not the move would materialise.

Ali admitted: “It was really stressful; it was like nothing I’ve ever experienced before. I was picking up the phone every five minutes speaking to different people, then putting it down and sitting in silence in my room for another five minutes and then picking the phone back up.

“But by the end, when I managed to put my phone down at like half 11 when it was all done, it was kind of relief to start with and then the excitement started building.

“Then when the international break was over, coming back I knew I had to get my head down, get down the road and get going again which was exciting.”

There’s plenty more from the Northern Ireland international in his full interview in the programme, whilst Wednesday night's skipper Greg Cunningham talks about recently becoming a father for the first time.

Also in this edition of The One And Only, Daniel Johnson answers fan questions, and Jack Baxter, Lewis Leigh and Joe Rafferty take part in our other player features.

Get your hands on a copy from around the ground for just £3.50, or alternatively you can order a copy to arrive straight to your door here.