DJ’s landmark moment brought his side level against Sheffield United, bringing the ball down on his chest from Ryan Ledson’s brilliant long-range pass, before tapping home into an empty net.

On finding out it was his 50th goal for the club, DJ said: “I didn’t actually know that, but it’s nice to know that now. At the time it was just about us getting back in the game so it was a good feeling.

“It’s unbelievable for myself on a personal level. I don’t ever tell anyone my goals, my personal goals, but that was one of them to obviously get to the 50 mark and happily for me today I’ve done it.

“I’ve been here a very long time and my part at the moment, and hopefully for the future, is to just keep relaying them messages and be the experienced person in the changing room that I am at the moment.” 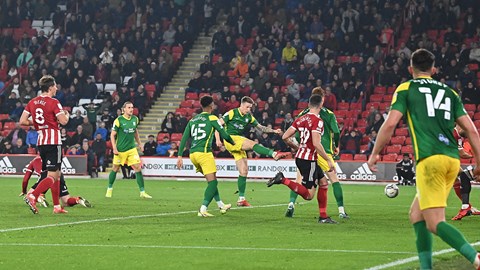 DJ wasn’t shocked by the quality of service he received from Ledson’s pass over the top, and the Jamaican midfielder’s chest control helped him to beat both a defender and goalkeeper Robin Olsen before finding the net.

“To be fair he does it all the time in training so I wasn’t surprised,” he told iFollow about Ledson. “I just kept repeating myself even to Hughesy, to step in on his left foot and just keep playing that ball because I think for defenders that’s the worst ball possible to defend when you’ve got someone running inside you.

“I had a little glance [at the ‘keeper], but I actually couldn’t see what it was. All I was concentrating on was just getting a good first touch into my path because I knew I’d beaten the defender, so I had a nice surprise when I actually turned around and saw the keeper so I knew I just needed to tap it into an empty net.

“The fans were giving me a bit of stick to be honest, so I had to give it back to them!”

Sander Berge’s goal in the 84th minute looked to have undone the leveller and earned the home side all three points.

However, North End kept fighting right until the end and got their just rewards when Emil Riis struck home to earn his side a dramatic point in the fifth minute of injury time.

DJ said: “We showed great character to not give up, I think that’s one of our strengths really to give everything until the last minute.

“But even before that, Emil had a great chance and I think if he scores that we probably go on and win the game, so these things happen, it’s football, it happens all the time.

“But we showed brilliant character to go get the equaliser and it’s what we’re about, fighting all the way until the end.

The last-gasp equaliser was celebrated in front of, and with, the travelling PNE fans behind the goal, and that made the moment all the more special.

“This is what it’s all about,” he added. “It’s a pleasure to have the fans travelling away with us to grounds like this because it’s a brilliant ground, a brilliant atmosphere, so to have our fans here as well to celebrate two goals and celebrate a good point for us I think is excellent.”

Hear more from DJ in his full interview at the top of this article.