The 17-year-old made several important saves during the match, including an impressive reflex stop late on after Jacob Slater had just extended the Lilywhites’ lead to 3-1.

Duggan was content with his performance but also praised the defence for making his task somewhat easier. 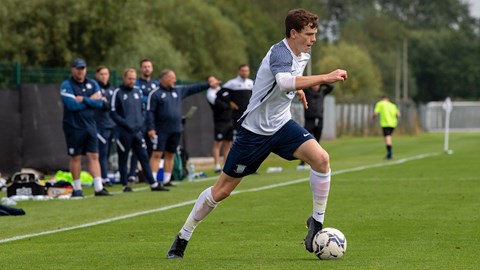 “I thought I played well,” he said, speaking to PNE.Com after the game. “I made a few good saves to keep us in the game, but the defence was very good and limited their chances.”

The second-year scholar, who was previously on the books of Birmingham City, explained why communication between himself and the defenders in front of him is so important.

He said: “I can see what they can’t see behind them, and if I give them information, we’ll keep clean sheets.”

He began the campaign as understudy to first-choice goalkeeper Oliver Lombard, but with the first-year professional currently on loan with Kendal Town, Duggan has started the last two matches and his impressive displays may have given Nick Harrison food for thought.

The towering shot-stopper said: “It’s been good being in the starting XI and I think I’ve played well so we’ll have to see if I keep playing.”