Teddy Mfuni felt the team played well but lacked that finishing touch after falling to a late defeat away at Carlisle United.

PNE U19 fell to a 2-1 away defeat in the EFL Youth Alliance league yesterday thanks to goals from Mason Hardy and Max Kilsby either side of Mfuni’s late equaliser. 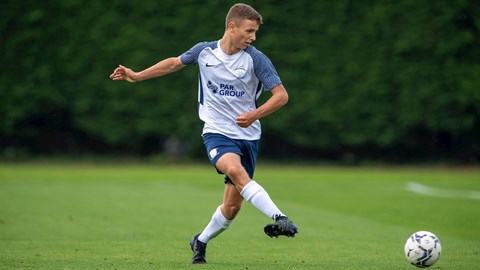 Mfuni said: “I think the team played well, I think they played really well, we got in and around the box we had so many chances, but we failed to put those chances away but overall, I thought we did well and were unlucky in the end.”

The young centre half opened his scoring account for the season in the defeat and was pleased to see the ball hit the back of the net.

“We had to get a goal back and I had to use my chance, I saw the ball coming and I anticipated where the ball would land and made sure that my effort would hit the back of the net and I was very pleased that it did. “

Going into the next game Mfuni believes focus will be the key to not repeating moments like those in the final seconds of the game again in the future.

“In those moments of the game I need to try and keep everyone focused till the last minute since everybody is tired from playing a full, extremely physical 90 minutes, I just have to keep pushing them until the end.”