Greg Cunningham felt Preston North End were worthy of the point they gained from the 1-1 draw against Stoke City at Deepdale.

Greg Cunningham felt Preston North End were worthy of the point they gained from the 1-1 draw against Stoke City at Deepdale.

Ben Whiteman’s free-kick moments before the break cancelled out Nick Powell’s early opener to make it five league draws in a row for the Lilywhites.

While that took PNE’s unbeaten run to nine matches, Greg is looking to get some more wins on the board to build on the succession of stalemates he and his team-mates have played out.

“We have been very hard to beat of late,” the No.3 told iFollow PNE. “We’re disappointed we’ve not got all three points because we’ve been playing well and that’s five draws on the bounce.

“It’s important not to lose games but it’s just as important to start racking up a few wins. Take nothing away from the opposition, Stoke were very good and their position in the league shows that.

“They caused us a few problems which we dealt with in the end. I think a draw was probably a fair result.”

Stoke made a strong start to the game, going ahead seven minutes in through Powell’s header, and Greg admitted that PNE took some time to adjust to their opposition.

“I wouldn’t say they caught us by surprise. We worked on what they were going to do. Sometimes it’s hard to stop. Their position play and movement of the two tens was very difficult to play with. We got to grips with that maybe 15 minutes in and nullified their threats.

“[Ben Whiteman] Whitey’s made a great finish but I felt then when you can play high up the pitch, you can force them into errors and we smothered them out and got the ball back in very dangerous areas, it’s just then about trying to convert those half chances and then we’re on our merry way. It’s another game unbeaten and we move onto Saturday.” 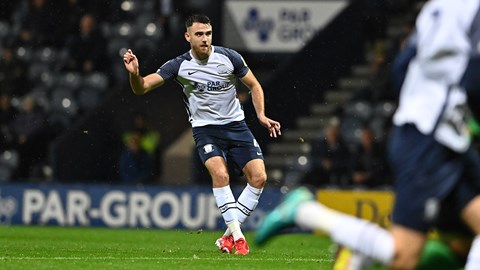 On Whiteman’s delightful free-kick, the Irishman continued: “It’s a touch of class. We know he’s more than capable of doing that, whether it’s a set play or from open play.

“He showed his quality again tonight. He’s been playing fantastic. It was just what we needed. I felt then we managed the game very well and were threatening at times.

“We carried that through to the second half and as the games on, both teams want to win it and the game becomes a bit stretched, but we’ll take the point and move on.”

At the other end, Daniel Iversen made some vital stops – and the Dane drew praise from Greg, too.

“I can be very critical of keepers, they’re the ones that always get the blame when the ball goes in, but he’s been fantastic since he came to the club on loan last year and we were delighted to have him back this year.

“He just showcased again that we’re very lucky to have quality keepers in Dan, Dec and Hudo. They’re pushing each other every day, they’re great lads. I’m delighted for Daniel, another great performance from him.”

While it’s five draws in a row now for North End, Greg felt that reflecting on each of those encounters, each result could be considered a positive, particularly given the strength of opposition during that time.

“First and foremost, especially after the tough start we had, it was important to stop the rot and we did that. We won back-to-back games and got a bit of a cup run going as well to keep that momentum.

“We’ve played some top opposition and you can look at it and say, ‘That’s five draws in a row,’ but if you look at the games individually, they’re all decent results, with some tough fixtures home and away.

“We’ve gone toe-to-toe and there’s no surprise that we’ve done well in those games because we know what we’re capable of, it’s just about converting some of those chances into goals and coming away with three points.”