Strikes from Mikey O’Neill and Max Wilson saw North End walk away with a 2-1 victory in Bradford to progress from the group stage in the Youth Alliance Cup.

Mikey O’Neill put North End ahead early in the first half before Bradford City equalised in the 33rd minute through Dylan Youmbi.

Half-time substitute Max Wilson scored for North End midway through the second half and the team managed to hold out for the three points. 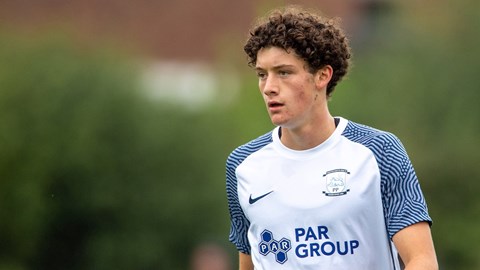 O'Neill Delighted To Progress In Cup

The hosts started off the brighter of the two sides, Harry Nevin with two important blocks early on to prevent a goal.

A mix up at the back by North End led to a goalmouth scramble but the defence was able to stand strong and eventually clear the ball off the line.

PNE’s first chance of the game fell to striker Finlay Cross-Adair, he cut in from the right and unleashed an effort on his left foot which was well saved by the keeper.

On 17 minutes North End took the lead. Cross-Adair crossed the ball into the box from the right-hand side, his cross was intercepted by the Bradford defence, but the interception fell to O’Neill to tap home to put PNE a goal up.

North End controlled the game after their goal but out of nothing Bradford equalised. A ball was played low across the box from the left-hand side and Youmbi was there to tap it into the bottom right-hand corner.

The final chance of the half fell the way of PNE and O’Neill, he connected with a Jacob Slater corner, but his effort was blasted wide.

North End were forced into a half time change Dana Amaral had to go off with an injury and was replaced by U15s Max Wilson.

Bradford had the first chance of the second half, a cross came in from the left-hand side, Mfuni’s attempted clearance deflected towards goal, but Pradic was able to tip behind for a corner.

It was North End who managed to retake the lead just after the hour mark. Slater put in a corner from the left, the ball was headed up in the air multiple times before it fell to Max Wilson to head home in the six-yard box.

The hosts were looking for an equaliser and made three changes in the space of six minutes. First of all goal scorer Dylan Youmbi made way for Raekeayn Jeffers then Ian Kamga was replaced by Leke Ajibode and finally Jay Tinsdale came on for Cole Roberts.

After coming on as a substitute Jeffers went close but James Pradic dived well to his left to keep it out.

Play was then halted for 30 minutes after a nasty clash of heads lead to a serious head injury to Bradford captain Sam Bentley.

Sam was stretchered off the pitch to get further treatment and play resumed.

Bradford pushed for an equaliser late on, but it was North End who came closest to adding to their tally. Cross-Adair played a ball through to Slater who raced through on goal, but his effort was fired straight at the keeper.

North End managed to hold onto the win and pick up all three points in the Youth Alliance Cup group stage.

Academy manager Nick Harrison admitted it was a very scrappy affair but felt his team played well enough to come away with the win.

“It was a scrappy cup game performance really, the objective in any game is to win, we put in a decent performance, but it was probably a scrappy game but fortunately, especially with it being a cup game, we managed to win the game.

“I’m delighted with the character of the players because it probably wasn’t a game where we were going to dominate possession and pass the ball really well because it wasn’t that type of game, but I thought we stuck at it and won our battles and managed to get the winner in the second half.”

Harrison credited substitute Max Wilson for putting in an “outstanding performance” to score the winner and help the team to victory.

“Amaral got a knock to the eye, and it was closing up as we were talking to him, so it was an easy decision to take him off to start the second half.

“However, I was delighted for young Max Wilson who is an U15s player and he ended up scoring the winning goal.

“I thought he was outstanding when he came on and credit to him for the performance.”