Josh Murphy sees his season-long loan to Preston North End as a chance to start enjoying his football again, with the move giving him a "new lease of life".

Josh Murphy sees his season-long loan to Preston North End as a chance to start enjoying his football again, with the move giving him a "new lease of life".

The attacker completed a deadline day move to the Lilywhites from Cardiff City, where he has been for the last three years, but he admitted he has not played as much football recently as he would have liked.

He therefore jumped at the chance to join up with PNE on Tuesday evening and he can’t wait to get going after the international break.

“I just feel like I’ve got a new lease of life at the moment,” he told iFollow PNE. “I can go and play football with freedom so I’m really looking forward to it. It’s going to be a new challenge for me but one that I’m relishing.

“I’ve got a lot to prove. I haven’t played a lot of football in the last two years or so, so it’s really a chance for me just to first and foremost enjoy playing football again, playing week in week out and just enjoy scoring goals and being there for the team.

“It’s going to be a completely different style to what I’ve been used to at Cardiff, but hopefully it will suit me down to the ground and hopefully I can hit the ground running and we have a good season.” 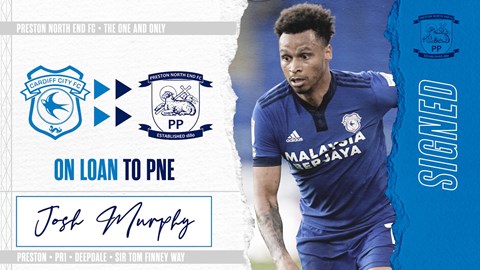 The 26-year-old arrives at North End with a wealth of experience, having featured almost 200 times in the Championship, as well as making 38 appearances in the Premier League.

He has yet to feature for Cardiff in the league so far this season, though, so he is hopeful this move will give him a chance to get some more minutes, but again stressed the importance of being happy with his game.

“[I will] come in, work hard, fight for my place in the team and hopefully I can let my football do the talking and give the fans something to be excited about.”

Prior to his multi-million pound move to Cardiff in 2018, Josh had spent his career at Norwich City, where he worked under current PNE head coach Frankie McAvoy and former manager Alex Neil.

It’s not just Frankie who will be a familiar face when Josh reports to Euxton next week, though, as he has played with the likes of Greg Cunningham and Declan Rudd previously in his career.

Asked if Frankie had an influence on his decision to join the club, Josh said: “It was a factor. I got a call off him yesterday and I was just like 'yeah, it’s a no brainer'. I want to play football and I’m sure it’ll be exciting to be working with him again and it’ll be an exciting season.

“I spoke to Greg because obviously we had such a good bond from our time at Cardiff so he was the first person I spoke to. I’ve not spoken to Dec yet so it’ll be good to speak to him again.

“Going in there, at least I know some people so it’s not going to be so daunting, but like I said I’m just so excited to get started and just enjoy my football again.”

With the squad currently off for a few days during the international break, Josh will first join up with his team-mates at the beginning of next week as they prepare for a double header on the road, before returning to Deepdale to welcome West Brom on 18th September.

Josh said: “I’m excited. I want to build up that bond as quickly as I can [with the fans] and just show everyone what I’m about, what I’m capable of. Obviously it’s a couple of away games to start with, so I’ll get them out the way and I’m just really excited to get to Deepdale.

“I’ve always gone there as a visiting player, but now to have the fans cheering you on is going to be something really good.”

Josh's full interview on iFollow PNE is available to watch for free at the top of this page.