Ben Whiteman was pleased to get on the scoresheet as he helped Preston North End to a 1-1 draw against West Bromwich Albion at Deepdale but admitted there was an element of fortune to his strike.

Ben Whiteman was pleased to get on the scoresheet as he helped Preston North End to a 1-1 draw against West Bromwich Albion at Deepdale but admitted there was an element of fortune to his strike. 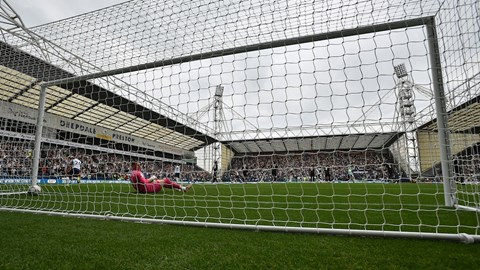 The Lilywhites’ No.4 opened the scoring with a deflected strike past Baggies stopper Sam Johnstone, just after the midpoint of the first half, but Frankie McAvoy’s men were pegged back by Matt Phillips’ header in first half stoppage time.

But Whiteman and his colleagues defended well while still retaining a threat in attack after the break, and the midfielder felt he and his team-mates dealt with the challenge of the recently relegated Premier League side well.

“I think if you look at the past two games, they’re going to be right up there; Sheffield United and West Brom,” he told iFollow PNE.

“We looked at the performance against Sheffield United and we came into the game today thinking that we need to get something from the game and round off a great week.

“It was a tough game. They’ve got a lot of big and physical lads, they hit areas, they load the box, but I thought we stood up to it today and as a whole we’re all pleased.

“That’s five unbeaten now. We’re on a good run at the minute and hopefully we continue it.”

The January arrival admitted there was some luck involved with his strike but joked that there would have been no goal had he not tried his luck.

“If you don’t shoot, you don’t score, I think we got very lucky with the deflection. I’ll take it, it’s a team game, and I thought to a man we defended our box outstandingly well and stood up to their physical challenge.

“It’s getting up and supporting the play, I definitely got very lucky with it but I’ll take it. If you don’t shoot you don’t score so I’m more than happy.”

The midfielder felt North End were resolute at the back but for the final moments of the opening period, in which Phillips pulled one back for the visitors.

“It was probably a sucker punch, I thought they hit areas and load the box, we knew their threats. I think we won a first header which we’ve rounded off and they’ve obviously got in at the back post and scored.

“On the whole, I didn’t think they really created anything, it was just more territory and loading balls into the box.

“The back five were outstanding with that; heading balls away, clearing things away, and Emil and Seani kept it lively up front. It was a good performance overall and we’re delighted with it.”

There is some respite from league action in midweek with the visit of Cheltenham Town in the Carabao Cup, but Whiteman says the team will be raring to go again and all looking for selection.

“I wouldn’t say it’s a break, we go into the game wanting to win and progress to the next round. We’ll be bang at it and hopefully we can get a positive result.

“It’s about recovery now, recovering for the next game, that’s probably what it’s going to be about for the next six or seven weeks; Saturday – Tuesday. We’ll all be at it and hoping for selection on Tuesday.”

A raucous Deepdale atmosphere also drew praise from Whiteman who said the North End faithful helped the team over the line.