Patrick Bauer said he enjoyed playing in Preston North End’s entertaining 1-1 draw against Millwall at Deepdale but admitted that he and his team-mates could have done better.

Patrick Bauer said he enjoyed playing in Preston North End’s entertaining 1-1 draw against Millwall at Deepdale but admitted that he and his team-mates could have done better.

The actions of opposition defender Murray Wallace were the most decisive of the contest as the Millwall man’s own goal put North End ahead within six minutes, before he went up the other end of the pitch to equalise for his side – all within the opening 22 minutes in PR1. 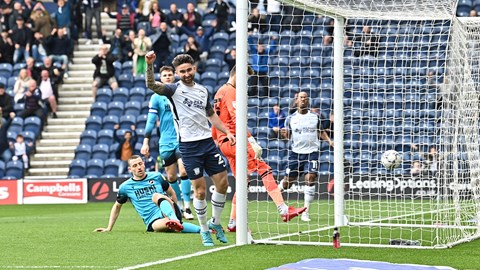 The draw made it four games without defeat for the Lilywhites at Deepdale, but having won the last three on home soil, Bauer felt the Lilywhites could have done better against the Lions to maintain their winning streak.

“I really, really enjoyed it,” he confessed to iFollow PNE. “Obviously, we got the first goal and we knew about their strength, they are a very good side, they have very physical players so we knew what was coming.

“It was frustrating to concede a goal, but overall, I think we could have played better, we would have liked to have continued the winning streak at home, but it wasn’t meant to be.

“Now we have to look forward to Tuesday and hopefully we can put on a good performance there.

Having taken an early lead, Pat was disappointed to be pegged back, particularly with the goal coming from a threat that had been identified in the team’s pre-match preparations.

“It was disappointing because we knew what they are about, a big, physical side and they put a lot of crosses in, so it was frustrating.”

The Lilywhites showed creativity throughout with opportunities forged in both halves but Pat explained that manager was looking for more going into the second half.

When asked what the half-time message was from the management team, Pat continued: “To be a little bit more brave on the ball.

“They didn’t give us a lot of space, but we could have scored a second goal in the second half. Seani [Maguire] had a really good chance, unfortunately he didn’t take it.”

“Even after set plays, we had a few chances, so we could have scored.”

While the hosts looked to have the better of the game for much of the 90 minutes, a triple save from Daniel Iversen proved vital early in the second half, and Pat admitted he and his fellow defenders are grateful to have the support of the goalkeeper behind them.

“I think he’s showed all season what a great goalkeeper he is. It’s always good to know that if a mistake happens, you have a goalkeeper like Dan behind you who can save the goal.”

Now North End look ahead to facing Fulham on Tuesday night, by which point the league leaders could have been crowned Championship winners.

Pat continued: “It’s a good game, they have the striker [Alexsander Mitrovic] with the most goals this season so it should be a good one.

“On our day we can beat any team and we go there full of confidence, we go there with seven points out of the last three, so we are looking forward to Tuesday.”

The defender is hoping North End can finish the campaign strongly in their final four matches of the season and give themselves a platform to start well next term.

“You can always be higher. I think we played really good games since he [Ryan Lowe] came. Obviously, we could have had more points as well. But it’s just about getting the last games done and hopefully we can get as many points as possible.