Preston North End goalkeeper Daniel Iversen said his side deserved nothing from their visit to Pride Park as they were beaten 1-0 by Derby County.

Iversen made a number of important stops during the contest – which saw both sides reduced to ten men – notably in the build-up to the only goal of the game as he denied Curtis Davies and Lee Buchanan from close range, but there was nothing he could do when Ravel Morrison found the back of the net at the third time of asking. 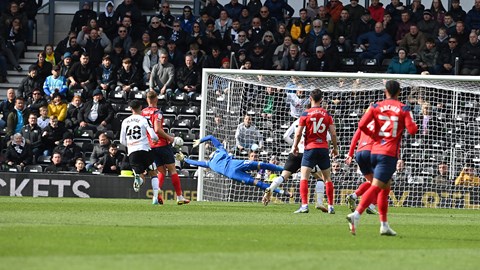 Speaking to iFollow PNE after the game, Iversen said: “It’s really hard [to take]. We came here to get three points and I don’t think we deserved that. That way we played for all of the game really so we didn't deserve anything from this game.

“I think before Liam [Lindsay] went out, we had some good chances. After he’s sent off, we got under pressure, the second half the same and they get a red card also but we don’t change anything, we just sat back and were waiting for them – they’re going to score, that’s how it feels. It’s disappointing.”

The Danish stopper felt North End needed to do more after Max Bird’s second half dismissal saw the sides brought back down to ten versus ten – with Liam Lindsay having earlier received his marching orders in the first half.

“I think [when] they’ve got ten men, you have to get up and push more. I think we sat back, I don’t think we created any chances. It’s disappointing.”

On Morrison’s strike, he added: “I don’t have to wait for anything, I have to think about the ball, get shots on target. It’s a great strike from them. It’s always disappointing when the ball goes in the net.”

Now Iversen has his sights set on the first West Lancashire derby at Deepdale in almost nine years as Blackpool visit Deepdale on Tuesday night.

“We have to do a lot better. We play like that against Luton also, today we have to do much better, that’s what the gaffer said also, that we have to step up now. We can’t just wait for them to come, we have to attack the game, go into a game. We start from tomorrow, train well and get ready for the next one.

“Now we’re disappointed with that game and tomorrow we have to look at the game and from there we’re looking at Tuesday night.”