Kitt Nelson, scorer of two in the U19s' 5-3 victory over Bolton Wanderers on Saturday, felt there was "room for improvement" in the team’s performance.

Braces from both Nelson and Jacob Holland-Wilkinson, as well as a goal from Josh Seary, led North End to victory to make it 18 league games unbeaten and they are now just three points away from the Youth Alliance league title.

“There was room for improvement in the team’s performance,” the first-year scholar told PNE.Com.

"We performed much better in the second half than we did the first.

“The standards that we hold ourselves to had dropped in that first half, but thankfully we came back and won the game. 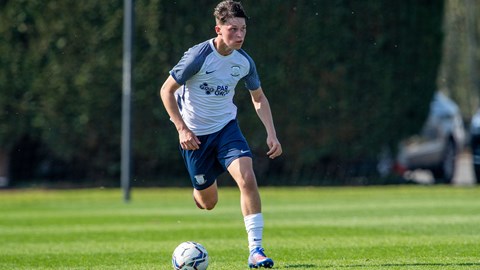 “Overall, it was a very good result for the team, and it leaves us one step closer to the title.”

Nelson was able to continue his goalscoring run with two goals, after he scored in a Central League fixture against Huddersfield Town in the week.

“My first goal must be my first headed goal in about six years,” he continued.

“I was very pleased with both my goals. I felt I played well overall, but I was just happy to help the team win.

“The team has been on a very good run for a while now. We’ve got good momentum going into this next game and cross fingers that we will get the three points and win the league.

“Everyone in this team works extremely hard, everyone pushes each other in both training and in games.

“I think the team deserves the title. We have set really high standards for ourselves and the team is full of really good players which is ultimately why we are where we are in the league.”

Academy manager Nick Harrison was pleased with the win, if not the display: “It was a great result, but I didn’t think it was a great performance,” he said.

“We showed some real good quality in front of goal to score the five goals, but overall it was just one of those games where the performance wasn’t there.

“This team does have character in abundance, it was disappointing to go behind early on again, but they came back.

“We went through a long stretch where we kept clean sheets and we’ve struggled for those recently so it’s something that we are going to take a look at.”