Lowe Disappointed To See His Side ‘Punished’

Ryan Lowe was disappointed after seeing his Preston North End side punished by a clinical Fulham outfit who recorded a promotion-clinching 3-0 win at Craven Cottage.

Ryan Lowe was disappointed after seeing his Preston North End side punished by a clinical Fulham outfit who recorded a promotion-clinching 3-0 win at Craven Cottage. 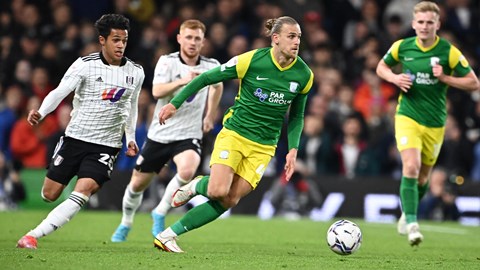 Aleksandar Mitrovic scored a first-half brace either side of a Fabio Carvalho strike to ensure the damage was done by half-time – but it was not a game without its chances for the Lilywhites, who started well and had the first clear opportunity through Ched Evans.

Lowe was disappointed with the goals the Lilywhites conceded, but equally so with the fact that his team did not get on the scoresheet themselves, which he said could have resulted in a different game and scoreline had they taken some of their chances.

He told iFollow PNE: “We’re disappointed with the chances we’ve gifted them in terms of them scoring them, because they had a ruthless edge, but I’m disappointed that we haven’t got on the scoresheet as well.

“Ched has a fantastic chance in the first couple of minutes and see you that in and then maybe. They’re a fantastic outfit and they deserve to be where they are, but in terms of us, you’ve got to put them chances away. If you do, the game turns out to be a different result and we never.

“What we’ve got to do is we’ve got to learn. I’ve said to the group in there that they have to keep learning on a daily basis to get better, you’ve got to smash the ball in that net and make sure it’s counted. We didn’t do that early doors.

“We had a couple of opportunities, I thought the lads were a lot better second half and were worthy of a clean sheet second half, even though we gifted them a few chances again.

“Ultimately, we can’t gift the ball away to better teams like we did tonight because you get punished.”

The gaffer was equally frustrated, though, to see Fulham presented with the opportunities that led to their three goals.

“Congratulations to Fulham first and foremost, promoted to the Premier League where everyone aspires to be. I thought we were in the game at different stages, I thought we had some great opportunities.

“You can’t give a Fulham team who are on their way to the Premier League, who are a good footballing team, who have got fantastic players, opportunities to score, and that’s what we did. We gifted them three opportunities. Yes, they’re still good goals on their behalf, but we gifted them.

The manager explained the message he sent to his players at half-time as they trailed by three goals.

“I’m asking for a bit of belief. I showed them the goals in there and told them and said, ‘Look, there’s the goals, that’s what we can’t be doing, and if you continue to do that, they’ll score more goals.’

“We changed shape, brought Bambo on and got Scotty on the pitch and Seani had to come on for Ched and looked a little bit dangerous, but we just lack a little bit of quality unfortunately.”

There was a word from the gaffer about the travelling North End contingent, including a special mention for long-serving supporter Harry Billington, as Lowe again praised the support on the road for his side.

“It’s fantastic. I went and seen Harry, 88 years of age, travelled 450 miles here there and back to see his beloved Preston North End. Apologies we couldn’t get a result for him especially because he’s an older fellow still supporting North End and that’s what we want.

“At the end of the day we knew it was going to be a tough encounter here tonight at Craven Cottage when they’re vying to get to the Premier League, which they have done.”